The trek is slated to kick off with the first of two shows January 10 at Irving Plaza in New York, New York and conclude February 10 at The Republik in Honolulu, Hawaii.

Released in November, “Blue Chips 2” was named one of “The Most Important Mixtapes Of 2013” by HipHopDX.

“Many emcees have predicted their future fame and fortune,” we wrote in our “The Most Important Mixtapes Of 2013” editorial. “Few have predicted the weather. After declaring that the follow-up to his highly successful 2012 mixtape ‘Blue Chips‘ would be released on ‘The First Day it rains in November,’ the chef-turned-rapper-turned-professional hype man got lucky when his native Queens, New York saw a drizzle on November 1. The ‘masterpiece theatre’ which he promised his fans, however, was the result of hard work and a continued chemistry with production team Party Supplies. The usual bragging and boasting can be found on nearly all 19 tracks of ‘Blue Chips 2,‘ along with his expected mix of sports and cooking references, curse words and grandiose remarks about things he may or may not have done with prostitutes.”

UPDATE: Action Bronson has announced new dates. On March 3, Bronson is set to hit New Orleans, Louisiana. Bronson has also announced the May 24-26 tour dates featuring Eminem, slated to take place in Detroit, Michigan. The infomercial-like announcement can be found below.

UPDATE #2: Action Bronson has announced South African tour dates, as well as the Second Leg of his Blue Chips 2 Tour, both of which are below. 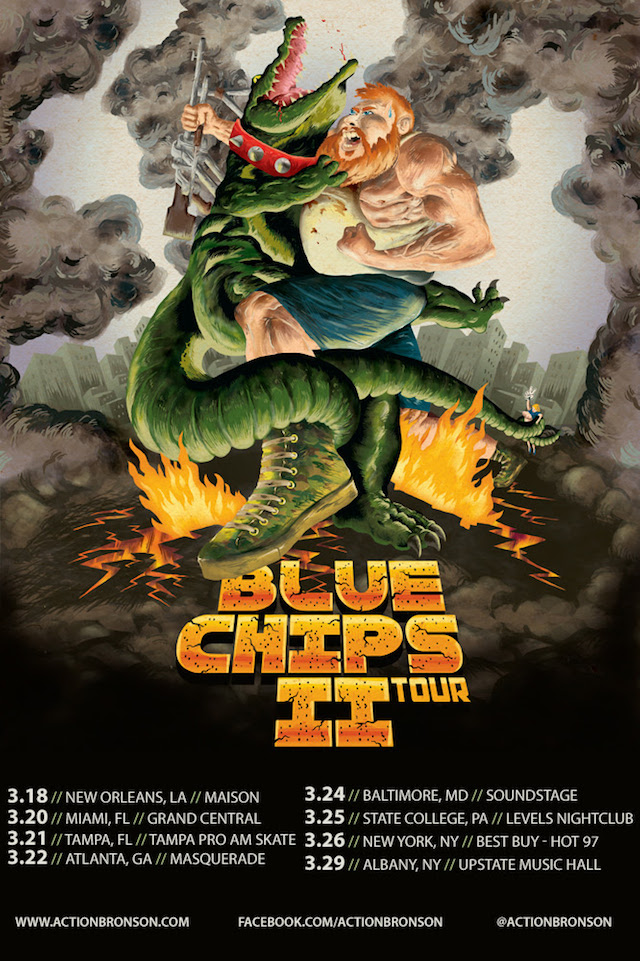 RELATED: The Most Important Mixtapes Of 2013 [Editorials]