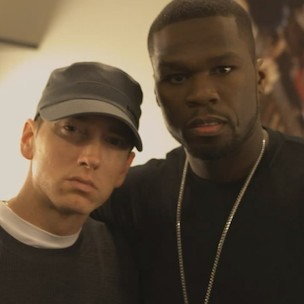 50 Cent, whose debut album Get Rich Or Die Tryin’ was co-executive produced by Eminem, recently spoke about his Shady Records boss and his ability to step away from music.

“By not having interest in a lot of other areas, [Eminem] was able to take a step back from these records,” 50 Cent said in an interview with Complex. “He just goes away and then he’d just watch [other artists] and then figures out what to do next. But [he’s] just not as active as all these other folks. Everything else that [he’s asked to] be involved in, he says no. He says, ‘No,’ more than he says, ‘Hi.’ The circle’s so tight…It speaks to the culture when people see themselves in [your] light, [your] greatness.”

During the interview, 50 also praised Eminem for his influence on Hip Hop.

“When they look at Em and they see themselves, it’s because they feel him,” 50 said. “You see these other guys come out of nowhere almost, have huge hits. I like Eminem. I think Hip Hop grew faster in different areas because of the success of his projects and there’s no other rappers doing other than whatever’s comfortable to them [despite Em’s influence]. They’ll name Top 5 MCs and not have his name on it when none of them have music that performed that well.”

In November, 50 Cent compared Eminem to his grandparents.

“My career wouldn’t even exist, I wouldn’t even be talking to you if it wasn’t for Em,” 50 Cent said. “It’s amazing that later in your life you could find someone that means so much to the comfort in your actual life. My grandparents were that for me before Em.”