Justin Bieber and his manager Scooter Braun appear on the cover of The Hollywood Reporter’s November 29 issue.

In the magazine, Bieber and his manager discuss the criticism that the young singer has endured throughout in his career.

Through difficult moments, Braun says that many celebrities have offered to help Bieber, including Eminem. Braun says that Eminem’s manager, Paul Rosenberg, has told him that Eminem would be happy to advise Bieber, as the following excerpt from The Hollywood Reporter piece describes.

Eminem’s manager, Paul Rosenberg, told Braun: “If you ever want Eminem to talk to him, he would do it in a second. He cares about that kid.” (Turns out Eminem’s daughter Hailie Mathers, 17, was a Belieber who got to spend quality time with her idol at his Detroit tour stops.)

Another rapper who is concerned about Bieber and willing to help is Drake, according to Braun, who says the rapper is often concerned after reading headlines about the singer.

“He’ll text me,” Braun says of Drake. “[He’ll text] like, ‘What the hell is going with this? I’m pissed. I’m calling him right now. I’m about to go in on him.’ Drake is like a big brother to Justin. And Justin really looks up to Drake. They have an extremely special relationship.”

In the interview, Braun also says that Will Smith has been there to speak with Bieber at various times, particularly visiting during a difficult part of his career.

“[Bieber] said, ‘Man, that makes me feel so loved. I woke up, and there’s Will Smith, one of, if not the, biggest movie stars on the planet. He took time out of his day for me,'” Braun says in the article.

Bieber and Smith reportedly share a weekly call to speak about life.

The cover for the magazine can be found below, followed by a video of the cover shoot featuring Bieber and Braun. 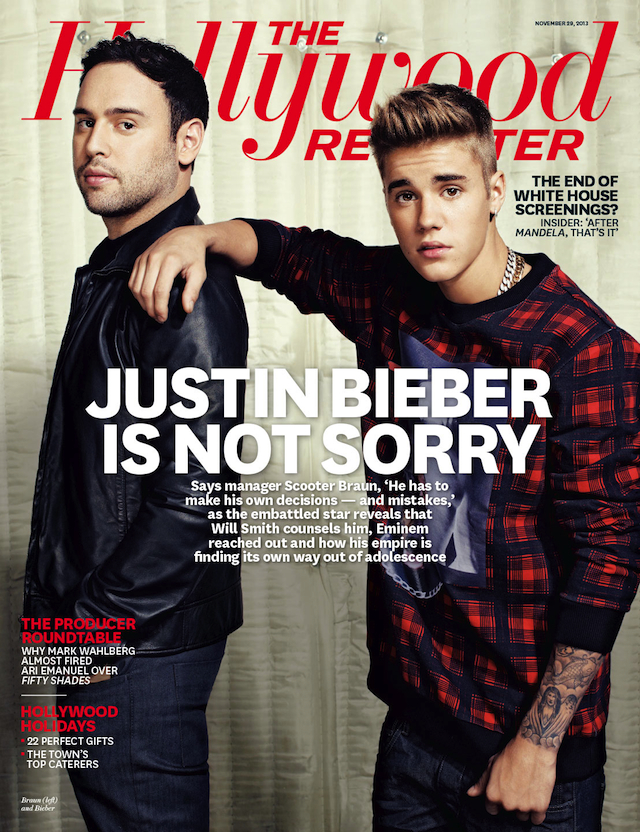