Eminem performed at G-SHOCK’s annual Shock the World event in Manhattan, New York yesterday (August 7). The event, which celebrated 30 years of G-SHOCK, coincided with the announcement of a limited edition watch collaboration between the brand and the Michigan rapper.

“With Hip Hop, it’s as much about where it’s from as who it’s for,” said Shigenori Itoh, Chairman and CEO of Casio America, Inc. in a press release. “Eminem has an immense and loyal fan base around the world, as does G-SHOCK, making this collaboration one that will connect closely with many thousands of collective fans.”

The watch will be available at select stores and boutiques December 2013. It features Detroit, Michigan’s skyline printed on the watch band as well as Eminem’s “E” logo on the watch face and band loop. The word “Shady” can be found on the watch’s packaging.

Eminem tweeted about the show before hitting the stage.

Images of the watch, courtesy of G-SHOCK, can be found below. 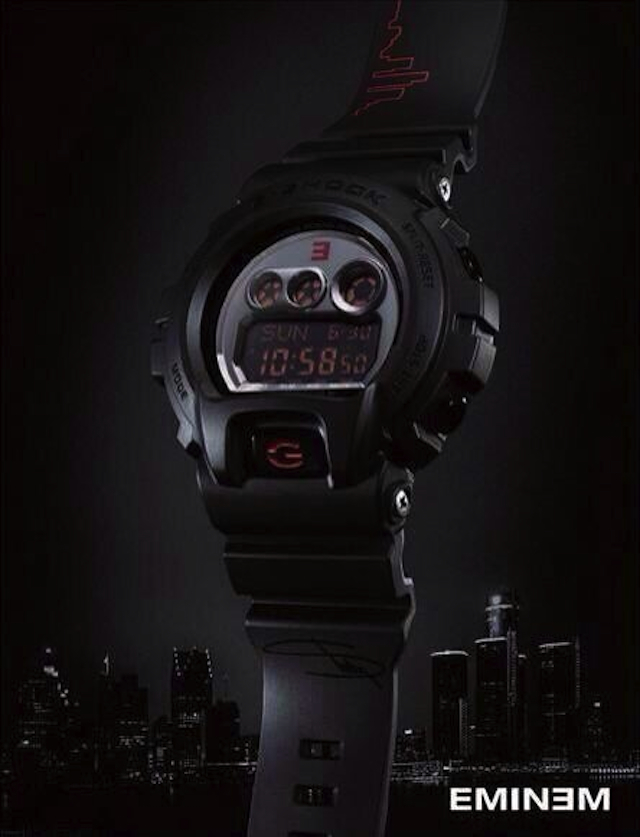 Yelawolf was Eminem’s opener at Shock the World 2013. Big Sean, who was present but did not perform, posted a short video of Eminem’s set on his Instagram page. The clip can be seen below.

Last year, Eminem performed several songs at a G-SHOCK event including “Won’t Back Down.” Slim told the audience that he “wouldn’t have gotten out of that dark place without” their support, referring to a period in his life that was plagued by drug addiction.

It has been reported that Eminem may release a new album this year. Shady Records president Paul Rosenberg spoke about the potential release in a February interview with Billboard.com.

“We fully expect to be releasing a new Eminem album in 2013,” Rosenberg said. “He’s been working on it for some time. It’s safe to say that it will be post-Memorial Day at some point, but we’re not exactly sure when. We’ve got some dates locked in for him to perform live in Europe in August, so we’re trying to see what else lines up.”