Wale recently helped a Hampton University student by “gifting” her with a $25,000 scholarship, according to thejasminebrand.com. Lauren Pryor, a sophomore Psychology student, won the Wale “The Gifted” Scholarship by calling into Norfolk, Virginia Hip Hop station 103 JAMZ.

“I was on my way to a friend’s home in Hampton when I heard the radio challenge that the twenty-fifth caller would win the prize,” Pryor said to the Gloucester-Mathews Gazette-Journal, as per thejasminebrand.com. “The station said to call between 4 and 5 pm. I called four or five times. The line was always busy. On about the fourteenth call I told myself to give it a rest then, I heard a man say, ‘Hello.’ I didn’t believe it. He told me there were millions of calls and he only picked up the phone 14 times nationwide.”

Wale attended Robert Morris College and Virginia State University on football scholarships before transferring to a third school, Bowie State, prior to his rap career.

Pryor received the scholarship at the album release party and concert for Wale’s The Gifted. Debuting at #1 on the Billboard 200 chart, The Gifted is Wale’s third studio album and the second to come out while signed to Rick Ross’ Maybach Music Group. 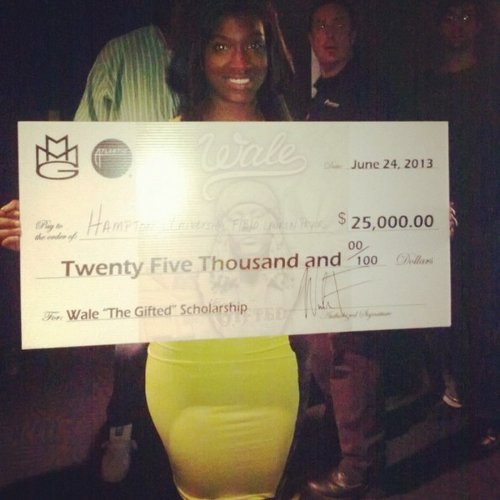 RELATED: Wale Talks “The Gifted,” Says He Didn’t Believe Rihanna Would Be On “Bad (Remix)”