Between 2010 and 2012, E-40 released seven solo albums: three in his Revenue Retrievin’ series and four more in his Block Bochure: Welcome To The Soil series. This does not include two volumes of History released last year, 40’s collaborative two-part effort with longtime friend and fellow Bay area music pioneer Too Short. All of these releases have not deterred the Sick-Wid-It Records founder and front-man from The Click from announcing three more efforts.

Today, E-40 premiered the artwork to Block Brochure: Welcome To The Soil parts 4, 5 and 6 with HipHopDX: 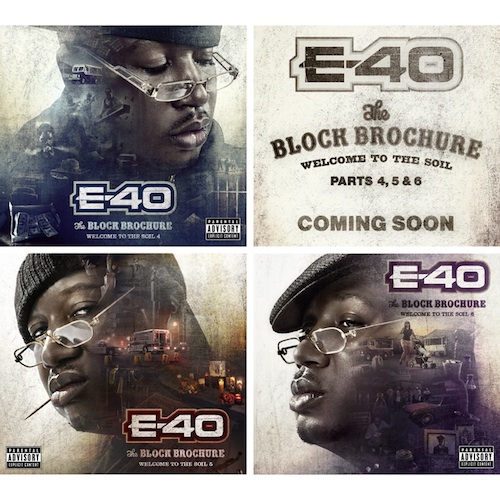 With the release of what will be his eighteenth, nineteeth and twentieth solo albums, E-40 explained, “I’m a score and a nickel deep in the game! That’s 25 years with real studio albums on the shelf. If an artist can release two and three mixtapes a year for free, I can release two or three official studio albums a year for money,” said 40 Water in an exclusive press statement. He continued, “As an independent artist I do what I want, not what I can. I’m putting out three albums because I’ve got three decades of fans that I gotta satisfy. I’ve been through hella different eras of music and I survived successfully! It took William Shakespeare 20 years of experience to write Hamlet! I make slaps and paint pictures with my raps and I’m in my prime with 25 years of experience. You ain’t gotta like me but you gotta respect me!.”

All five of 2012’s E-40 releases debuted on the Top 200. The Vallejo, California icon released all the efforts through his EMI-distributed Heavy On The Grind Entertainment. This is 40’s second imprint, following tremendous success with Sick-Wid-It in the 1990s and 2000s.