Over the weekend, Amanda Bynes insulted Rihanna on Twitter, starting a public feud. While the motive behind the disses is presently unknown, Bynes began tweeting at Rihanna with insults she would later delete. In her tweets, Bynes said that Rihanna is “not pretty enough” and she claimed that is the reason Chris Brown assaulted her. In her tweets, Bynes also added that she almost named her dog Rihanna.

While the tweets were deleted, many caught screen captures of the insults. TMZ posted the image below when reporting on the story. 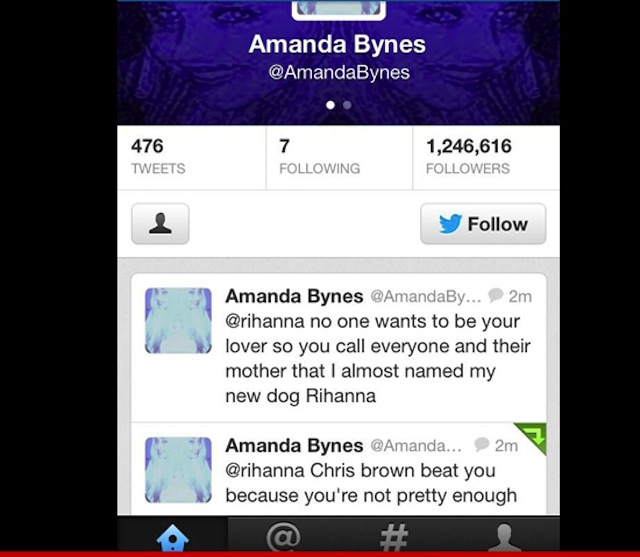 Rihanna later responded with a remark alluding to Bynes having a drug problem. Rihanna did not delete her tweet.

Ya see what happens when they cancel Intervention?

With that tweet, Rihanna was alluding to Bynes’ recent legal woes. Bynes was recently arrested for possession of marijuana and tampering with evidence after allegedly throwing a bong out of her window. She was also charged with reckless endangerment because that window was on the 36th floor of a building. Bynes has said she was sexually assaulted by police officers during the arrest. She has also said that she does not drink or do drugs.

In her tweets, Bynes was speaking about the troubled relationship between Chris Brown and Rihanna. The two separated after he assaulted her in 2009. They later reconciled briefly after the restraining order was lifted before breaking up earlier this year.