Waka Flocka Flame has had a busy 2012. The Atlanta, Georgia-based rapper had a public falling out with Brick Squad 1017 and album collaborator Gucci Mane. Still retaining his Brick Squad Monopoly imprint, Flocka has been working on the follow-up to his 2010 solo debut, Flockaveli.

Today on Twitter, Waka announced that Flockaveli 2 will release exactly two years to the day from his Top 10 debut. The Brick Squad Monopoly/Warner Bros./Atlantic Records artist will keep the October 5 tradition alive.

Guests, production and confirmation of a label have yet to be released—though in January, the rapper called the album, “Flockaveli Part 2,” and stated that Timbaland and Wyclef Jean were involved in the recording. Last year, Waka released Triple F: Friends, Fans & Family. Another Top 10 appearance, the LP featured Nicki Minaj, Meek Mill and Drake, among many others.

UPDATE: In an interview late last month with Toronto, Ontario’s DJ Dames Nellas, Waka Flocka Flame announced the push-back of his Flockaveli sequel. “I was gonna drop Flockaveli 2 in October, but I said, ‘You know something? I wasn’t giving all my people—the fans my all,” Flocka said on Flow 93.5 FM. “So I wanna really go in. I wanna give a real hard album. So I’ma aim for like first quarter [2014]—January.”

Claiming “I’m done, really,” on the album’s recording, Flocka confirmed that he will largely reprise the production cast of Lex Luger and Southside from the 2010 debut. Additionally, Waka will work with Rico Love and B.o.B.’s mentor, Jim Jonsin on this album.

UPDATE #2: In a new interview with 16 Bars TV, Waka Flocka Flame also confirmed a Busta Rhymes appearance on Flockaveli 2. “I got nice features,” boasted Waka. “I’ll just expose it: I got Busta Rhymes.” The pair worked together on DJ Khaled’s “Welcome To My Hood Remix” and N.O.R.E.’s “Lehhhgo.”

He elaborated on his overall vision for the album. “Flockaveli 2 is basically like a big ol’ mosh-pit, a Hip Hop mosh-pit.” 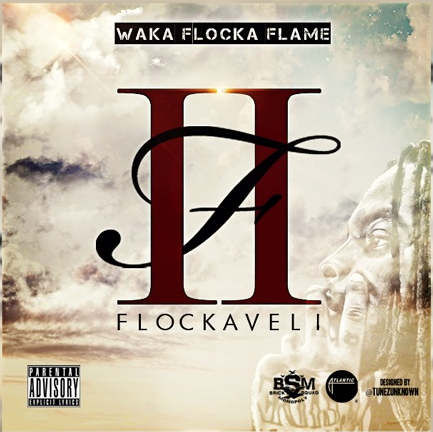 Just wait on it #Flockaveli2