Danny Brown’s calling card is the fact that he’s so unlike other rappers he may run with, but according to the Detroit, Michigan native, he’s always been that way. Perhaps part of the confidence comes from always having known what he was supposed to be doing. “I was born a musician,” he tells HipHopDX, at a recent Adidas Originals show in Atlanta, Georgia. “The only reason I am the way that I am is because of my environment. If I was born a White boy in the suburbs, I would’ve been a Rock musician. At the end of the day I would’ve made music no matter what, I’m musically talented.” DX caught up with Fools Gold Records emcee after his show in East Atlanta and he gave details on what makes him an original in a sea of Rap cats.

Brown says that his fashion choices have a lot to do with it, since his first pair of adidas in the seventh grade. “At that time [in 1993] shelltoes were cracking,” he says. “But really? Niggas was wearing low-top black and white or low=top white and black but me, I was being different by getting the mid-cut navy blue and white.”

Having a certain edge has been a major selling point for the XXX creator but he vows that it was never anything contrived. “I’ve never had the conversation with myself to say [I’m going to be ‘different’], I just did shit,” he shares with a laugh. “Even when I was selling drugs, or whatever I did before Rap was just a part of where I’m from. It had nothing to do with my actual dreams and shit. That ain’t me, ‘cause I mean, I ain’t doing that no more. So that really wasn’t me, it’s just that was what I was around.”

“If you’re born with a fucking basketball rim in your backyard,” he adds, “You’re gonna shoot some jumpers every now and then. They were selling crack on my front porch, of course I’ma sell a few rocks.” 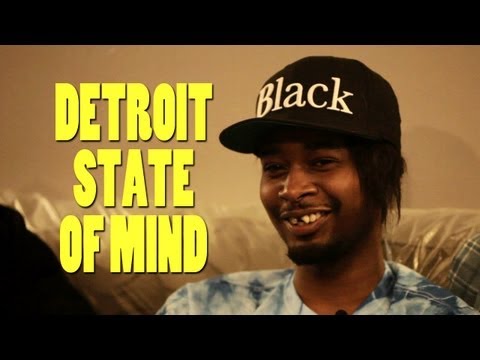 Brown credits his willingness to branch out beyond his environment as being responsible for his outlook on life and his affinity to downplay his celebrity, saying that he would prefer to stay at home and play video games than to go clubbing and pop bottles. “Detroit ain’t the type of place to be touristy and hang out in the hood,” he explains. “So I just stay at my crib. I’m not famous. I don’t live a famous life.”

Even in saying that though, Danny Brown must admit that he has that star appeal. There’s something about the emcee that has caught the attention of many, including Kathy Griffin who recently had him and fellow newbie A$AP Rocky on her Bravo talk show. They definitely had a more than memorable appearance but Brown thinks they could’ve done better.

“It was me and [A$AP] Rocky’s first time really being on TV,” he reveals. “So we were just hella nervous. We had a talk before doing the shit and we were like, ‘Damn, if we kill this interview we might be able to get movies or be the new Redman & Method Man.’ We were just so nervous about doing good for that shit that we didn’t. We drunk mad lean because we were nervous.”

A movie could still happen for the rapper though, he’s talented—one of the few in Detroit who have made it past a certain margin, being nationally recognized and all.

Eminem, obviously, tops the city’s roster of dope emcees with successful careers, but when this writer hints that there could be someone coming up after Em, even better lyrically, Brown shoots the idea down promptly. “I wouldn’t say better [than Eminem], but just as good,” he says. “At the end of the day, you can say that you spit better but can you make hit songs? Em still made hits, he knew how to spit but he could still figure out how to make hits.”

Regardless of the fact that the media continues to align Danny with the city he’s from, the rapper is in no rush to rep for Detroit stating that he doesn’t identify himself by what region he hails from. In fact, with the recent happening in his hometown and the emergency city manager having to be brought in, it seems Brown cares even less.

“My own world is my reality,” he states. “The world that I live in, is the world I live in. I don’t know what’s going on in Detroit. I don’t give a fuck.”

“I stay in my crib, do what I do and when I leave it’s because I’m doing a show or some shit outside of Detroit,” he continues. “If I go to the hood it’s to buy some lean or some weed and get the fuck up outta there. I don’t give a fuck about the financial situation there because when I was there, y’all ain’t help me do shit. So I’m up outta there, do my own thing, live my own life in my own world so anything having to do with Detroit, I have nothing to do with.”

“All I care about is my family, and that’s it. My family still staying there. I just had to pay the taxes on the house. But I don’t give a fuck about it. It don’t give a fuck about me. That’s what people have to understand, at the end of the day, all these mothafuckers like ‘rep my hood, rep my shit…’ I’m not about repping Detroit, I’m about getting the fuck up out of Detroit.”