Reports yesterday (March 27) confirmed that rapper Gucci Mane was in police custody after evading an arrest warrant for several days. The Warner Bros. Records star was charged with two counts of assault, after allegedly attacking an autograph-seeker with a bottle. That man happened to be a United States Army soldier, and showed authorities the wounds he claims were inflicted by the rapper with a troubled legal history.

In a hearing later yesterday, Gucci Mane was denied bond, meaning that the 1017 Brick Squad rapper will remain in what is believed to be Fulton County Jail.

“Mr. Davis has a history, we’re not going to skirt that issue,” Gucci’s lawyer Drew Findling told press outside of the courthouse, as reported by AllHipHop.com. “That history made it difficult for him to get bond today.” Gucci’s attorney did however note that there aren’t confirmed witnesses of the alleged attack, which happened in a Atlanta club less than a week ago.

At present, Gucci Mane will remain incarcerated until his April 10 court date.

UPDATE: Yesterday (April 10), Gucci Mane was indicted one one count of aggravated assault in the Fulton County District Attorney’s Office. The Atlanta Constitution-Journal photographed the indictment, which includes the photo below: 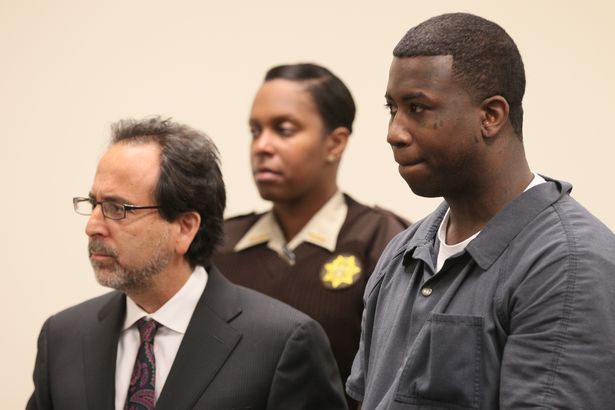 UPDATE #2: Following being denied bond last month upon his initial hearing, Gucci Mane’s bond was set at $75,000 earlier this week. Fox Atlanta adds that Gucci’s attorney Drew Findling told reporters that the longtime Warner Bros. Records rapper plans to post bond in Fulton County, before he will be transferred to nearby DeKalb County. There, Gucci Mane has probation for an unrelated misdemeanor charge.