Action Bronson has no problem getting vivid with the imagery in his music, so it’s no surprise that the Queens emcee opened up about his past in an recent interview with Montreality. From the type of student he was in school to jobs he had as a teenager, Bronson waxes about everything under the sun, including being managed by Eminem’s manager Paul Rosenberg, and what his last meal of choice would be. Other topics include upcoming projects, and his collaboration wish list:

In other news, Young Money president Mack Maine revealed that he’s as excited as anyone about Drake’s upcoming album. “The worst thing you can do is get that dude mad because he creates music from his heart and off emotion too,” said Mack in an interview with MTV’s “RapFix Live.” “So when you get him mad … You saw what happened with the ‘5 AM in Toronto,’ and it’s more to follow. That dude is amazing, awesome.” Mack also addresses Nicki Minaj’s evolution as a brand, and speaks on Tyga’s growth as an artist.

Check Out MTV’s Interview With Mack Maine: “Drake’s Explosive ‘5AM In Toronto’ Just The Beginning”

Finally, artist Jay Shells has taken it upon himself to express his love of Hip Hop in a unique fashion. For “Rap Quotes,” Shells went all over New York an posted over 30 signs from artists such as Mos Def, Kanye West, Nas, Jeru tha Damaja, GZA, CL Smooth and more, matching lyrics that specify certain street corners to their location. Below are a few examples: 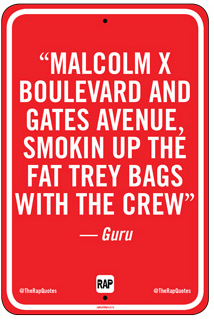 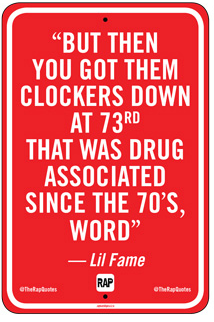 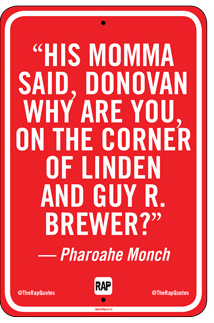