As promised last week, Lil Wayne gave fans the specifics of his summer America’s Most Wanted Tour. Joined by Atlanta, Georgia’s T.I. and Future, Young Money’s general will kick off on July 9 (different than the July 5 previously reported), and conclude at the top of September. The tour will promote Wayne’s I Am Not A Human Being II, which releases this week.

In fall, the tour will move to Europe. According to Rap-Up.com, Mac Miller will be Wayne’s tour-mate in the United Kingdom. Those dates have yet to be announced.

UPDATE #2: T.I. has announced that two Atlanta, Georgia rappers have switched spots on the America’s Most Wanted Tour. “It was Future, and something happened,” Tip told Hood Rich Radio. “Future pulled. He disassociated himself from the tour for whatever reason. It’s still love.”

T.I. announced that 2 Chainz will join him, Lil Wayne and French Montana on the tour that kicks off July 9. New tour flyers have not been released yet.

UPDATE #3: Today (June 11), a spokesperson for Must Be Nice rapper G-Eazy confirmed his appearance at all America’s Most Wanted Tour dates as well. 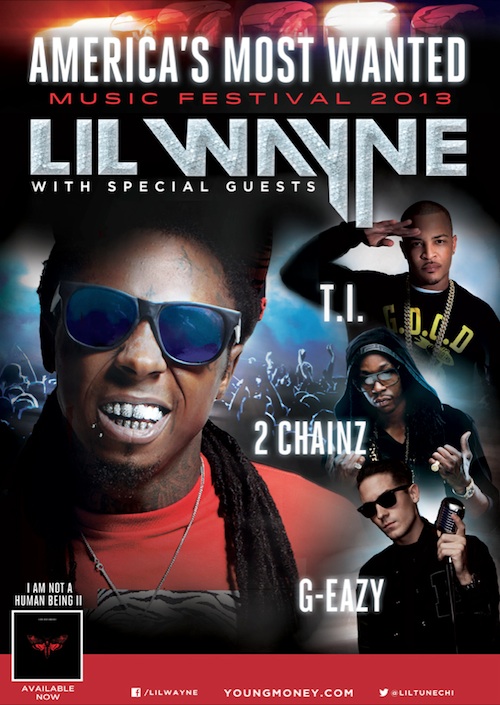