This week was filled with beef. Moments before she was scheduled to hit the stage at Hot 97’s Summer Jam 2012, Nicki Minaj pulled out of the lineup after personality Peter Rosenberg called “Starships” “bullshit.” The decision not to perform sent shockwaves through the Hip Hop community. Meanwhile, Iggy Azalea broke her silence on her beef with Azealia Banks, tracing it back to September 2011 and explaining how the problem runs deep. Erykah Badu also engaged in some online slander after The Flaming Lips’ Wayne Coyne released a cut of their collaborative video that did not get her approval, compromising her brand and integrity.

Nicki Minaj was scheduled to perform at last Sunday’s Hot 97 Summer Jam 2012, taking place in New Jersey. But moments before she was slated to hit the stage, the Young Money rapstress pulled out on her appearance after radio personality Peter Rosenberg branded her “Starships” single “bullshit.” Everyone from Angie Martinez and program director Ebro Darden to Lauryn Hill and Nas had something to say about her cancellation, which Lil Wayne broke on Twitter. Funkmaster Flex interviewed her on-air shortly after, and she didn’t back down, inciting a turf war between Hot 97 and NYC’s Power 105.

Iggy Azalea and Azealia Banks’ beef runs deep. After Banks fired shots at Azalea and T.I. on Twitter, the Australian rapstress finally broke her silence on their ongoing differences, explaining just how far back their problems go. Stating that it all began at the CMJ Music Festival in September 2011, Azalea traced their problems to Banks’ Twitter, stating that she picked a fight by branding her a racist for rhyming about being a “runaway slave master.” The heat turned up when Azalea was featured on the cover of XXL magazine’s freshman issue, inciting issues that are yet to be cleared. Watch the full interview below. 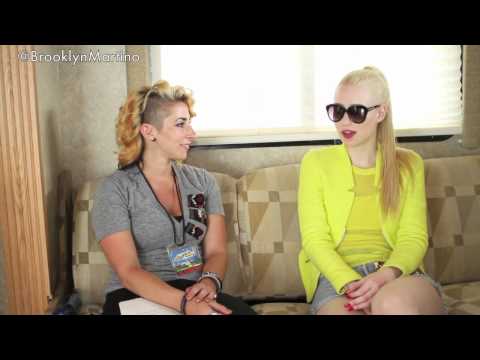 It was all good just a few months ago. Erykah Badu and The Flaming Lips’ Wayne Coyne joined forces for several collaborations as far back as early 2012, with the video for their duet “The First Time I Ever Saw Your Face” impacting this week. But as soon as the controversial clip hit the Internet, the R&B songstress put Coyne in the crosshairs, stating that he prematurely released the video without her consent and breached her contract with the group over having creative input. She said it was conceived in poor taste and was deceived with the final product. Watch the video below to judge for yourself.

– Drake Gets Punk’d By Ashton Kutcher