MC Shan once rapped that they used to do it out in the park, and now, it looks like Tools of War intends to bring it back there. In a recent press release, Tools of War and co-sponsors Rane and Serato announced this summer’s line-up for their annual True School NYC Park Jam series.

Founded by Jorge “Fabel” Pabon and Christie Z-Pabon, the True School NYC Park Jam is a ten-year running celebration of Hip Hop culture and the art and history of DJing. This year, Tools of War will host three distinct series – Spanish Harlem Hop, Crotona Park Jams and Digger’s Delight – throughout the entirety of July and August.

A number of legendary artists are scheduled to spin during the series, including Lord Finesse, Johnny Juice, Large Professor, Grandmaster Caz, Tony Touch and many more.

A promo video and flier detailing a list of the events can be found below. 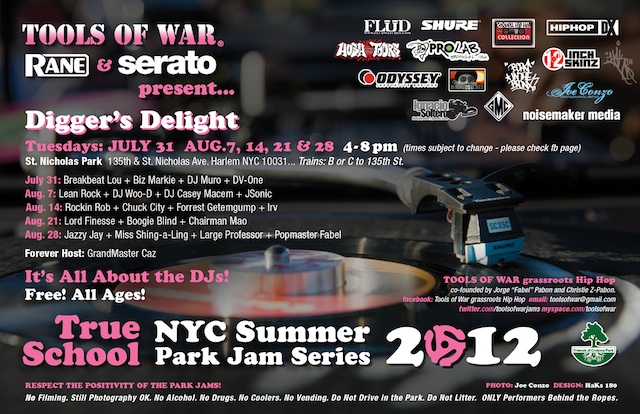 UPDATE: Today (July 31) at Harlem’s St. Nicholas Park in New York City, Park Jams’ Digger’s Delight will take place. Heralded record collectors DJ Muro and DJ Cash Money will perform, along with DJ DV One and Breakbeat Lou. The event runs from 4 to 8 pm, and is free to the public.