Wiz Khalifa has been on a post-Coachella press junket in support of his latest single, “Work Hard Play Hard.” As he slowly gears up to the August release of his upcoming album, O.N.I.F.C., there have been nonstop questions about Kanye West referencing the relationship between Wiz and his fiancée, Amber Rose. Lost in all of the gossip about the woman that went from West’s muse to Wiz’s soon-to-be wife was a bit of news about an upcoming collaboration.

“I just talked to [Dr.] Dre the other day for the first time,” Wiz revealed. “We had to talk about the set for Coachella. It was funny, because he actually just called to tell me he’d talk to me later.”

Wiz said he met Dre at Rick Ross’ birthday party, where the two exchanged pleasantries. However the pre-Coachella conversation provided an opportunity to discuss working together, and Wiz revealed that the pair have already scheduled some studio time together. For his part, Wiz said, “It’s gonna be amazing, man.”

As for why he’s limited his collaborations, prior to working with Ross, Snoop Dogg and others during the last few years, Wiz also gave his reasoning.

“Honestly, I just get caught up in being a fan too much,” Wiz explained. “I don’t even like spoiling that shit. And I think that everything happens in time when it’s supposed to happen.”

Wiz Khalifa’s full interview with Peter Rosenberg, Cipha Sounds and K. Foxx can be seen below. 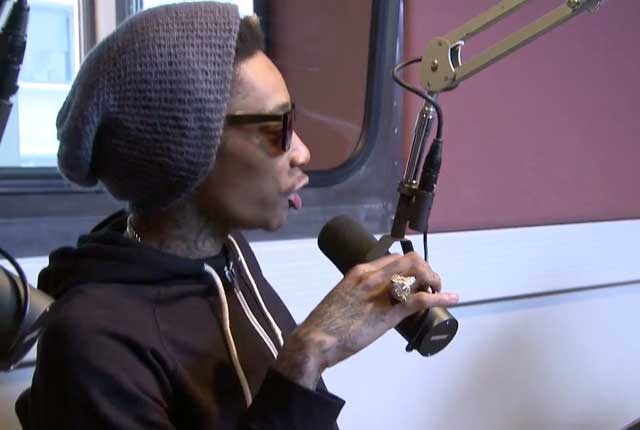