Philadelphia emcee/producer Lushlife is preparing the release of his latest album Plateu Vision for April 17. Now, with only a week before the album’s official relase, the acclaimed genre-bending artist is offering a full stream of his latest project.

According to a recent press release, Complex is now offering a full stream of Lushlife’s forthcoming album via Soundcloud. The project features guest verses from the likes of Styles P, STS, Heems from Das Racist and more.

Lush is also preparing a new tour in support of Plateu Vision. He will join Cities Aviv and Shabazz Palaces on a select number of dates over the next two months. The complete set of tour dates can be found below.

In other news, it looks like A Tribe Called Quest won’t be the only Native Tongues group to get the documentary treatment. Now, it appears that the entire late 80’s/early ’90s collective will soon be the subject of an upcoming film titled Speaking In Tongues.

Directed by Omar Akir, the film covers the history and legacy of the many groups that comprised the Native Tongues. Music video director Benny Boom has signed on to produce the film, which will feature interviews from the likes of the Jungle Brothers, De La Soul, A Tribe Called Quest, Kool DJ Red Alert, Monie Love, Black Sheep and more.

This Wednesday April 11 will mark the debut appearance of Just Blaze as co-host of The Combat Jack Show. To celebrate the new addition, the crew will be joined by guest DJ Premier for a special three hour broadcast from 7 PM to 10 PM.

The Combat Jack Show airs every Wednesday from 10 PM to 12 PM. A flier of the show can be seen below. 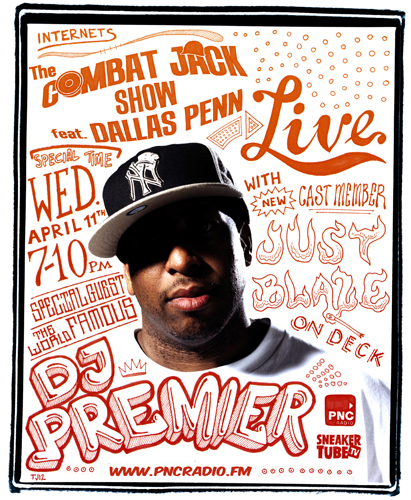