Since they linked up for their first song, it seems Slaughterhouse hasn’t been able to stop. Their work together led to an independent group project which garnered critical acclaim. This led to the group signing with Shady Records. As they prep the final touches on their Shady debut, welcome to: Our House, the group is on tour. While hitting the road, they recently stopped to chat about the group’s origin, Eminem’s influence and why “nobody’s gonna beat this album.”

“In terms of us forming a group, it was [Joe Budden’s] idea to get all of us on a song,” Royce Da 5’9 explained in his interview with Raw Hustle. “But, I don’t think nobody can really take credit for forming the group.”

Crooked I then added that he feels the fans were integral in the formation of Slaughterhouse.

Once the group was formed, their self titled independent release gained the attention of several people, include Eminem. This led to rumors that would eventually ring true as Eminem signed the crew to his Shady imprint. With Eminem working closely on their new project, Royce explained that he has learned a lot from his longtime friend and collaborator.

“My approach to future albums has changed after I watched what Eminem is doing to our records. He’s mixing everything. He’s teaching me so much…That makes me excited about doing my future albums.”

This is a sentiment Crooked I echoed a few months ago during an interview with HipHopDX.

“Every opportunity that I have to be in Detroit in Eminem’s studio, I’m fucking there,” Crook shared with us in December. “I almost thought about buying a condo out there just so I could go in and learn and make music under the umbrella that he created. He’s a fucking genius with that shit. It’s been a great ride and hopefully we can take it all the way.”

Eminem has worked so closely with the group that Joell Ortiz said he feels Em was the fifth member of Slaughterhouse on this project. He then likened the group to Kentucky’s basketball team, saying that nobody will be able to top this project.

“I have to include Eminem because he’s been like the fifth member on this project. Right now, we’re like Kentucky in the March Madness run for the tournament. You’re dealing with five pros. No one’s gonna beat them kids and nobody’s gonna beat this album.”

Slaughterhouse is currently on tour. More from the Raw Hustle interview can be seen below. 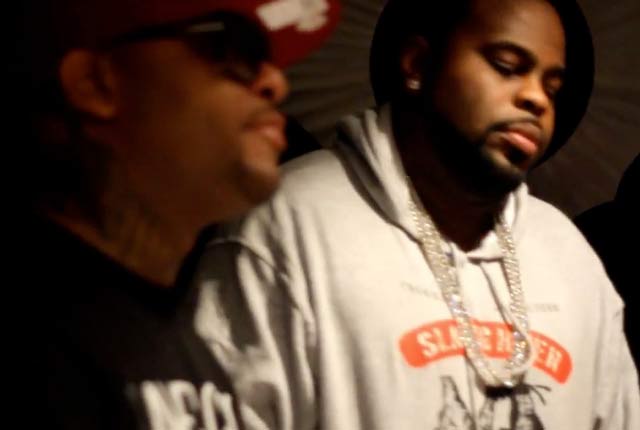