Kid CuDi was captured on film trashing the stage after his set was cut short at The Heatwave festival in Australia. In a post on his Tumblr page,Cudders addressed the incident and explained that promoters will have to deal with his temper if they decide to prematurely pull the plug on his performance.

“If my set is EVER cut short at any show, im trashing the stage. Not out of anger, it takes a lot to get me furious nowadays, but out of principle,” he wrote. “The fans always deserve a full set at all shows, especially when they spend their hard earned money on expensive tickets. A lot of artist wouldnt do what I did in Australia, but I will. Spread the word. No matter the circumstance, cut my set short, im breaking shit. And next time im startin a riot. Me and my fans. Cause promoters will sometime take advantage of the artists, and u gotta let em know what time it is. Cutting nobody any slack.”

CuDi is currently prepping his upcoming album with Dot Da Genius, WZRD, which is tentatively set for a February 28th release.

Watch footage of CuDi trashing the stage below. 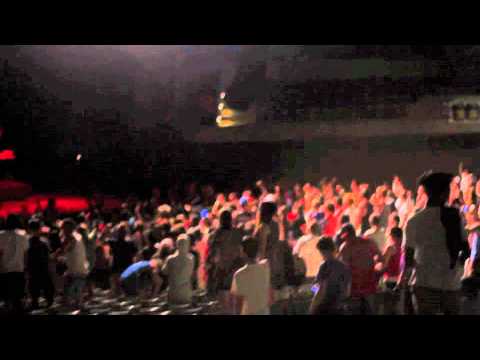