MC Hammer took to Twitter on Wednesday (October 26) morning to join the thousands that now accuse Oakland police officers of abuse due to their tactics in dealing with Occupy Oakland protesters.

The protesters, Oakland, California’s version of the Occupy Wall Street anti-greed protesters, were met with tear gas and rubber bullets on Wednesday. Dozens were arrested at what has been described by many as an otherwise peaceful protest.

@MCHammer
MC HAMMER The unabated abuse of the PEOPLE can never be tolerated !!! They were expressing systemic frustration and pain, peacefully. #OOAK
Oct 26 via Twitter for iPhone Favorite Retweet Reply

@MCHammer
MC HAMMER You knew this would happen. You cannot eliminate the middle class and expect quiet resolution. #occupyoakland
Oct 26 via Twitter for iPhoneFavoriteRetweetReply

@MCHammer
MC HAMMER Now is the time to define who is the 1% There are many who are successful and give to Causes that impact the community directly.
Oct 26 via Twitter for iPhoneFavoriteRetweetReply

@MCHammer
MC HAMMER If Oakland is to be the Lamb, then someone step forward and tell them in no uncertain terms what the DEMANDS are. We THINK here.
Oct 26 via Twitter for iPhoneFavoriteRetweetReply

“I made the decision with the team that was in place to put an end to what I see as a very critical situation that posed a significant risk,” said City Administrator Deanna Santana in defense of the police action.

Watch a news report on the Occupy Oakland protests below, courtesy of ABC News: 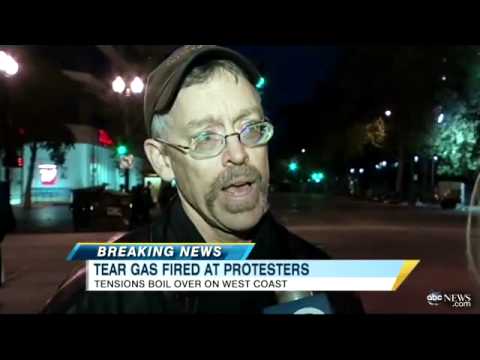