According to a recent press release, Spike Lee’s 40Acres.com will host the release of Man or the Music 2 (40 Acres Edition), with Spinna and Period on the 1’s and 2’s. The two-disc mixtape will find the two DJs mixing a variety of rare, live performances and remixes from the King of Pop, in addition to a number of tributes likes of Erykah Badu and the Roots, Stevie Wonder and ?uestlove.

“Working with an MJ aficionado like DJ Spinna has definitely helped elevate this year’s MJ tribute to another level,” said J.Period in a recent press release. “Fans of last year’s MJ mixtape are in for a real treat when they hear what we have unearthed from the archives for this one. Many thanks to Spike Lee and 40 Acres for their continued support, and for giving me another opportunity to share my love of Michael Jackson‘s music with the legions of fans in attendance at ‘BKMJ.’”

Although the tape will be available for download, fans can pick up a free limited edition 2 CD set of both editions of Man or the Music series at the “Brooklyn Love MJ” event by signing at 40Acres.com in advance.

Spike Lee’s “Brooklyn Loves MJ” will be held this Saturday August 27 from 12 PM to 6 PM at Prospect Park’s Nethermead Field. The event will feature DJ Spinna working the wheels of steel and an art exhibition of graphic artist Fuse Green’s work.

The full tracklist for Man or the Music 2 (40 Acres Edition) can be found below. 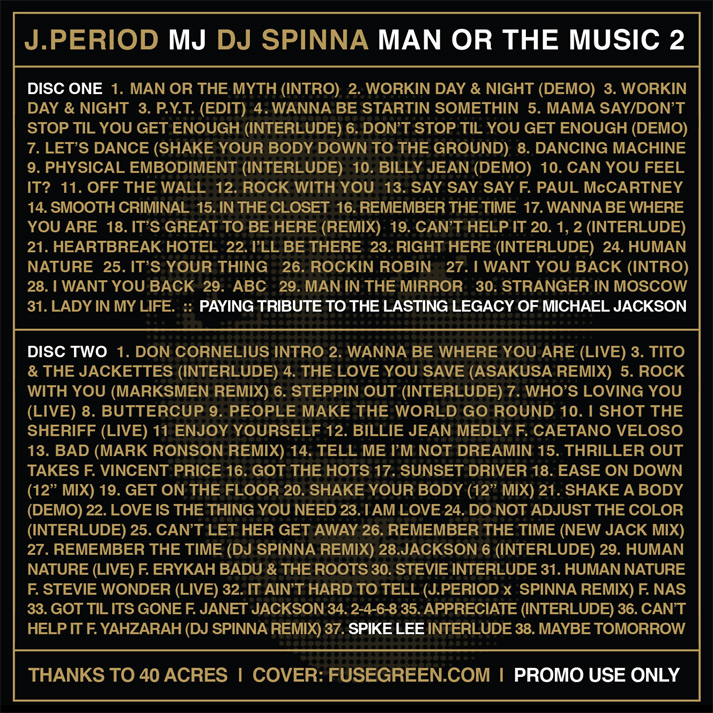