The dog days of winter are most certainly here. No new Rap releases charted this week, but mainstream and veteran releases continued to find consumers last week. Nicki Minaj very nearly achieved the #1 position that she’s yet to enjoy, and her and Kanye West are marching towards platinum within the next month.

DXnext alum Nicki Minaj climbed two more spots to #2 with Pink Friday. This is the highest charting position for the release, which has yet to reach #1. After seven weeks on the charts, the album fell within 14,000 units of Taylor Swift’s Speak Now, which pulled in that top spot. The effort out-sold the critically-acclaimed Kanye West album for a fourth straight week, which was released on the same November 22 date. Featuring both Nicki’s brand of singing and rapping, Pink Friday has appearances from will.i.am, Drake and Eminem.

Bruno Mars, who climbed extensively two weeks ago, jumped up two more spots to #3. This has encompassed 17 spots in the two weeks for the album that’s been on the charts for 14 weeks in total. Mars’ debut Doo Wops & Hooligans, features B.o.B. and Damian Marley.

Less than 50 units behind was Rihanna, who also fell three spots. Her Loud album climbs towards platinum, with features from Eminem, Drake and Nicki Minaj.

Kanye West’s My Beautiful Dark Twisted Fantasy fell two spots, to land at #7. West has been rumored to be releasing “All of The Lights” as his next single, which features Rihanna, Fergie and Elton John, among others.

T.I.‘s No Mercy fell three spots to #19. The emcee and label owner’s latest album was released while he was incarcerated for probation violations earlier this year, involving drugs. Officially crossing the 350,000 milestone, the latest album from Tip features Kid Cudi, Scarface and Rocko, with production by DJ Toomp, Kanye West and Jake One.

Lil Wayne‘s digital-turned-physical 2010 release I Am Not A Human Being slid down five spots to #25 in the last week. Selling over 680,000 units to date, the album could reach platinum this new year.

After a major drop last week, Diddy and Dirty Money’s Last Train To Paris fell 13 spaces after a month on the charts. Now at #40, Diddy’s first Interscope-backed album features Drake, T.I. and Rick Ross. The conceptual work is said to be soon getting remixes to popular tracks, featuring Lil Wayne, Mary J Blige and others.

Falling 13 spots, Lloyd Banks’ H.F.M.2 (The Hunger For More 2) is widely considered a comeback for the Queens, New York rapper. The album features Kanye West, Raekwon and Pusha T, and returned to the charts two weeks ago after several weeks off of the Top 200.

Two weeks ago, we compiled a one-stop page for you to see who pulled in plaques this year from singles and albums. With Nelly, Ludacris, Wiz Khalifa and the usual suspects, the findings might surprise you. 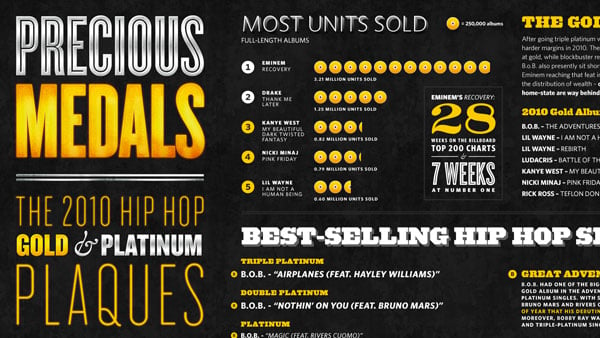