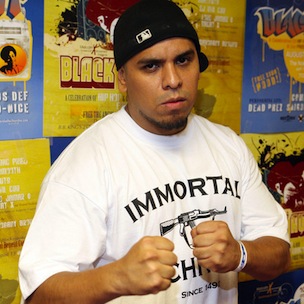 Since his acclaimed 2008 album The Third World Immortal Technique has been under the radar. The Harlem rapper by way of Peru has certainly been busy though. HardknockTV caught up with Tech, where he talked about his recent activity and his upcoming albums.

“I went out to Afghanistan in order to solidify and complete the project, the green light project, of building a school and orphanage there with the money I raised through a series of shows and as a percentage of The Third World Album,” Tech said when asked where he’s been in the past two years.

“Besides that, I also travelled down to Colombia and Peru. Where I began a small part of development on the land that I purchased,” said Tech, rather than buying cars or jewelry like other rappers or listening to the banks’ advice. “I bought a huge farm about half the size of central park, I can do whatever I want, I grow whatever I want on it. If I had invested in these ridiculous little plans that the bank suggested for me, I’d probably have 60% of the money I have now instead of having triple the income and being able to provide sustenance for people.”

Check out the rest of the interview here.