As recently as Jay-Z’s Blueprint 3 Tour, N*E*R*D toured with songstress Rhea. The lovely singer was long rumored to be added as a fourth member to the band consisting of Pharrell Williams, Chad Hugo and Shay Haley. Pharrell told the Associated Press this week, why Rhea was never formally added.

“She needed her own band to do the kind of music that she does, which is R&B,” said the bandleader, Skateboard P. Rhea’s role with N*E*R*D* in recent years is something he referred to as experimentation.

However, Star Trak fans will be pleased to know that Pharrell is currently producing Rhea’s debut, with her own band, Jealous Lover. The superstar producer referred to the work completed to date as “incredible.”

N.E.R.D.’s next album, Nothing, is due this September. 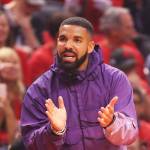