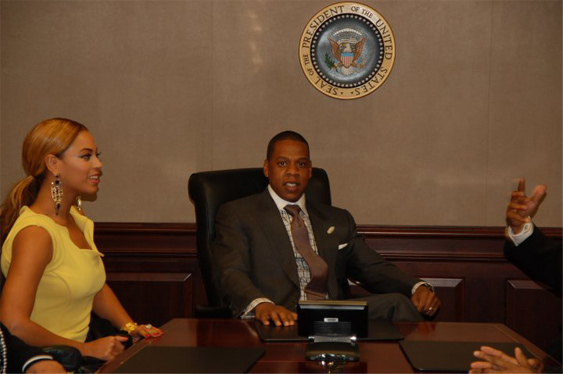 After revealing that he has been invited to the White House on several occasions, rapper Jay-Z finally took them up on their offer this week.

While in Washington D.C. for his Blueprint 3 Tour stop at the Verizon Center, Jay-Z along with Beyonce and Trey Songz paid an impromptu visit to the White House.

The White House confirmed with the Washington Post that Jay-Z and friends had in fact visited the White House on Wednesday, March 3 and spoke briefly with President Obama.

Before the White House confirmed the visit Jay-Z revealed the news to fans at the Verizon Center. The rapper also gave a birthday shout out to a fan in the audience who happened to be the son or daughter of a White House staffer.

“I don’t know where you are, but happy birthday. I just came from the White House,” Jay-Z revealed to fans. “And your pop works there. He said, ‘Happy Birthday.'”

Just last month Jay-Z revealed to the BBC’s Jonathan Ross that he had received several invites to the White House, but had been too busy to accept any of them.

“I’ve been invited to the White House a couple of times. Hopefully we’ll keep him in for eight years so I’ll have time to get there,” Jay-Z told Ross.