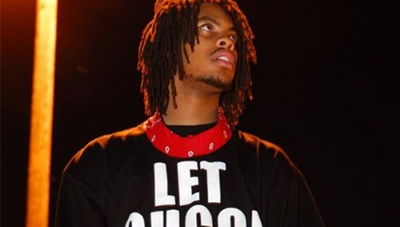 Gucci Mane‘s So Icey artist Waka Flocka Flame was hit with two gunshots in Atlanta today. KarenCivil.com confirmed the reports, that the 23 year-old rapper (born Juaquin James Malphurs) was the victim of an attempted robbery at an Old National Highway gas station. There, Waka Flocka was approached and told to hand over jewels. After refusing, the Warner Brothers-backed rapper was shot twice.

Early reports indicate that Waka Flocka is expected to recover fully soon. There has been no indication at where he was hit on his body, or whether or not the rapper was robbed.

Last month, Waka appeared on Gucci Mane’s The State vs. Radric Davis, appearing on “Bingo.” A member of Gucci’s Brick Squad, Waka garnered buzz with his 2009 mixtape ironically titled Shoot Me Or Salute Me. He can be heard on single “O Let’s Do It”

UPDATE: XXLMag.com revealed today that Waka Flaka is recovering. Speaking with So Icey affiliate DJ Holiday, who did The Writing’s On The Wall with Gucci Mane earlier this year, XXL learned that Waka was shot in the arm and the shoulder. The latter shot affected the rapper’s chest and neck area. At present, he reportedly is still having mobility and breathing issues. The magazine did however learn that the young rapper remains in high spirits, reportedly joking about the incident among friends and family, which have included daily calls from prison from Gucci Mane. Click here to read the quotes and first-hand reports, at XXLMag.com

In related news, The Atlanta Journal-Constiution has clarified some misnomers from the initial reports. The incident happened at Bubble Bath Car Wash, not the gas station initially reported. The attacker did get the rapper’s jewels, but the shooting occurred in an exchange as the man was leaving. The attacker reportedly has a “$” tattoo on his check, and three circles and four squares tattooed between his eyes.

Waka Flaka is the son of So Icey CEO Debra Antney, who has yet to comment on the matter.