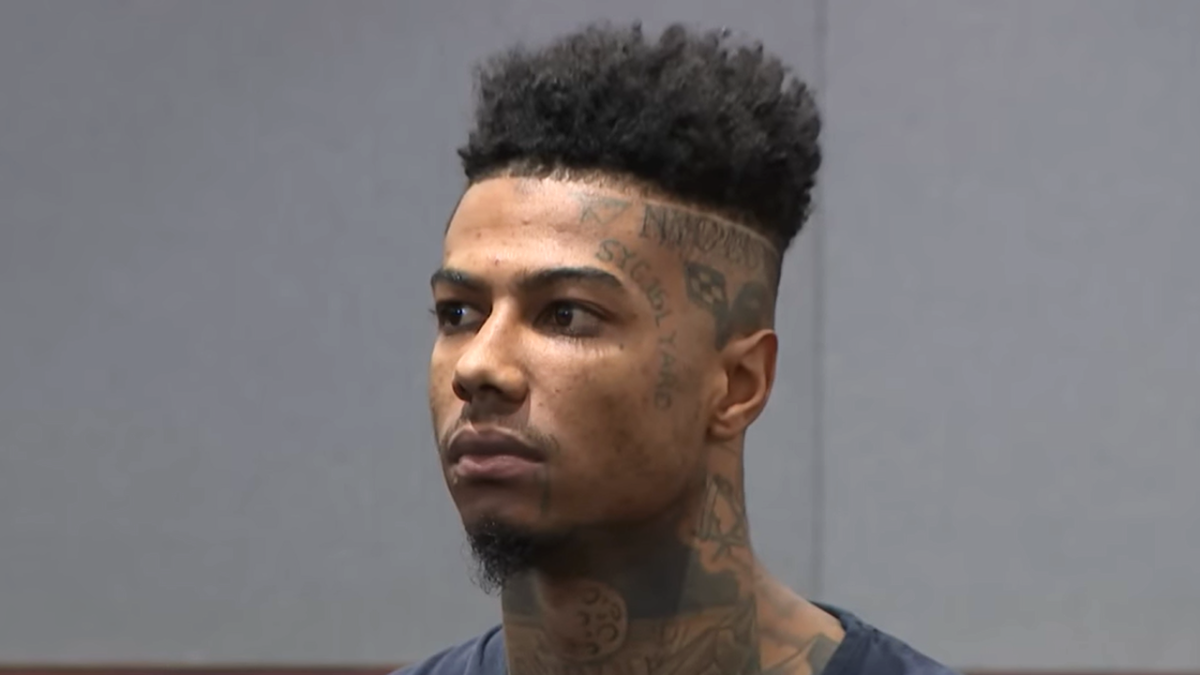 Blueface is expected to be released from police custody following his arrest for attempted murder.

The Los Angeles rapper (real name Jonathan Jamall Porter) was handcuffed in Las Vegas earlier this week in connection with an alleged shooting that occurred in Sin City on October 8. The 25-year-old was charged with attempted murder with the use of a deadly weapon and discharging a firearm into an occupied structure.

After initially being booked into Clark County Detention Center, Blueface appeared in court on Wednesday (November 16), where a judge set his bail at $50,000 and noted: “[It is] likely that Mr. Porter is going to make that bail.”

The judge also laid out various bail conditions that Blueface must comply with, including staying away from and having no contact with his alleged victim, in addition to staying in touch with his attorneys, making court appearances and avoiding further trouble. When asked if he understood the conditions, Blueface replied: “Yes.”

UPDATE [10:02 a.m. PST]: According to Chrisean Rock, Blueface has been released from jail. “Thank you lord for sending him back home safe,” she tweeted early Thursday morning (November 17).

Thank you lord for sending him back home safe🙏🏽🤞🏽

Footage of the October 8 shooting surfaced after his arrest and allegedly shows Blueface firing shots into a vehicle outside a Las Vegas nightclub. The rapper can be seen stood outside the venue with his crew when a truck pulls up. The vehicle then speeds off as the rapper pulls out a gun and shoots at the driver.

According to TMZ, the driver had gotten into an altercation with Blueface’s crew inside the club earlier that night, although Blueface himself wasn’t involved. When the man reappeared in his truck, he reportedly asked the crew: “Who hit me?!” which led to the shooting.

Blueface: Video Allegedly Shows Him Shooting At Man in Truck

Blueface’s on-again/off-again girlfriend, Chrisean Rock, and manager, Wack 100, were both present at the rapper’s court hearing on Wednesday, where they celebrated his “likely” release.

“Lawyer threw them gloves on and we beat another case,” Wack gloated in a video posted on Instagram, referencing The Game’s line on “Ali Bomaye.” Rock added in her caption: “His family here is we got him Daddy coming home.”

#PressPlay: Looks like Chrisean Rock and Wack 100 took a trip to get Blueface out of the slammer! pic.twitter.com/zmUlrDkmyY

Rock previously voiced her support for Blueface shortly after this arrest, declaring she’s “riding” and “sliding” for her man in a series of Instagram Story clips.

“Everybody that keeps saying it’s a sign to leave — what the fuck is you talking about?” she said. “Stop playing. N-ggas never left me when I went in. I’m going to court tomorrow and that’s all that matters. He coming home, I don’t know what y’all talking about. But tune in on our documentary, our TV show on the Zeus network, we outside.

Blueface, who was previously arrested for gun possession in his native California in February, is due back in court in January.