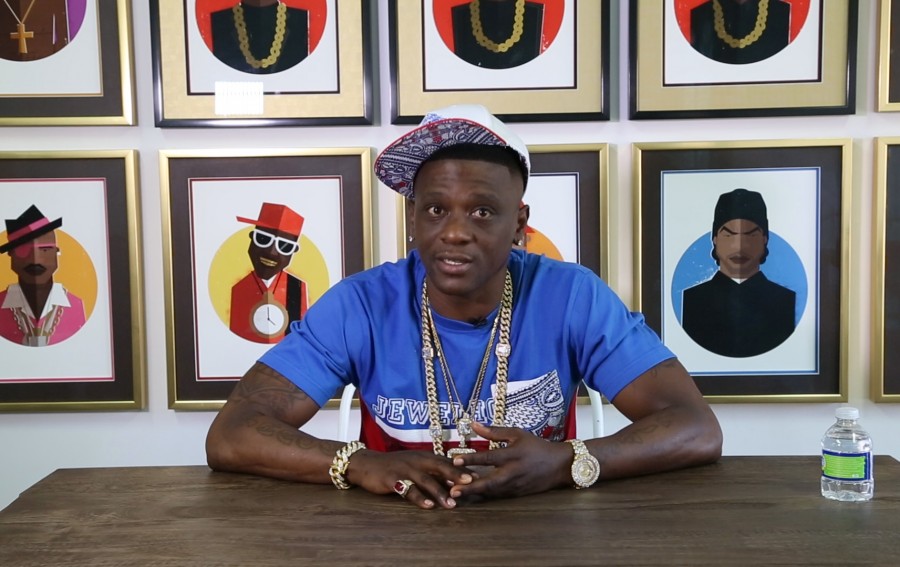 Boosie Badazz spent the past few years breaking away from a past that included several years in prison at his career’s height. And just like that, everything in the Baton Rouge legend’s life had seemed to be right back on track. The man formerly known as Lil Boosie was avoiding trouble and gaining more momentum within Hip Hop.

Then, November arrives and he announces his battle with kidney cancer on Instagram. Boosie’s world was yet again turned upside down. Known for his incredibly loyal fanbase, they were in his corner insuring #PrayfaBoosie trended across social media. A successful surgery and rigorous recovery made him better than ever. With a newfound perspective on life, he works even harder by attempting to drop a project once a month through 2016 starting with both In My Feelings (Goin’ Thru It) and Out My Feelings In My Past. When Boosie along with his management comes to the DXHQ, he was his vibrant and jeweled out usual self. The same artists who got his start with Baton Rouge’s Concentration Camp outlet and found himself the flagship rapper of the Pimp C backed Trill Entertainment continues to be a lesson in perseverance despite incredible obstacles.

In part two of our exclusive interview, Boosie Badazz describes using the approach of Pimp C to make his artists better and why he moved to Atlanta from his hometown of Baton Rouge.

“Pimp C always made me want to do better. I could never satisfy him all the way. That made me want to do more harder music. And he told me that after years and years. I would bring something in there and he’d be like ‘It’s aight, that muthafucka aight.’ Even with my bitches, I would bring around, he’d be like “the bitch feet don’t look right.’ He wasn’t doing that to be arrogant with me, he was doing that to make me stronger. He was doing that to make me say it wasn’t my best and to keep on going. I would know this muthafucka jamming, he’d walk in and say, ‘that’s aight’ before walking out. That made me go back in the studio and get better. He made me a hog. I could never please him. If you keep on trying to do better, you’ll be better. Now, I use that same tactic with my artists. It could be a smash hit and I’ll come in there like, ‘it’s aight.’ Don’t even give them time to talk to me.”

“It’s easy because I was groomed. I take those same things I learned and use it on them. B-Will, who is doing good right now. He’s regional and hot right now. We got J-Dee, Juicy, Lee Banks and others. They’re getting some little checks right now and we’re going to keep on stepping it up until I’m ready to talk a label deal.”

“Aww man, it started happening quickly because I had three or four videos on television at the time. I had the ‘A Bay Bay’ remix on BET, ‘Out Here Grindin’ and ‘Whip Me Down.’ It just started taking off nationally. I was going to places I never went before. I was going to perform in Alaska and these places were sold out. I had major distribution then. So, people were hearing my music. A lot of people who first heard the album was like, ‘He got some nice music.’ Then that made people backtrack and that’s what really got my fans. They were like ‘ 06, he’s been out for seven years?’ That Bad Azz album took me nationally. It took me places I’d never been before and opened up people’s eyes.”

“I realized my status because 06, I had a million dollar home and Bentleys. I was balling man. I had so much shit. I was living my life and taking care of my peoples, but I was living fast and wrong. I was just somebody getting money. Sometimes getting this money can screw you up a bit. It was a good time. I enjoyed myself. I enjoyed the money, the women and had a football team for kids. I was just living.”

“Basically, I’m the head honcho. I’m the one doing what he has to do. Right now, I’m a lot focused on my Bad Azz Music Syndicate while still being over here too. Right now, we’re about to get Webbie back up and running. We’re trying to drop his Savage Life 5 project next month. We’re probably going to use “Problem” as his single. Right now, it’s still good business. At first, it was shaky business. When we came out, we reconstructed the deal. I got what I wanted. It came out smooth. It’s business.”

“I was like, ‘man we’re going through it.’ When Turk and Mel beat his charges, I was smiling. I was on death row then. I was smiling like, ‘We beat them bitches.’ I was smiling and happy as shit. When Phat died I was like ‘damn, here we go again.’ Then Webbie was spiraling out of control which was pissing me off. I was getting so angry in there. They tried to ban Webbie from BET. I was getting so angry because I wanted to be by his side and strengthen him. I felt like when I left, Webbie ain’t have his side-kick with him. I didn’t like how people were trying to shit on my dude. He’s a star and everybody goes through it. I didn’t like that shit at all.”

“I want to [see another Ghetto Stories]. With me and him working, we just got to get them in the studio and get him focused. Once we get into the studio, we make magic. We’re helluva combination.  When I work with him, it brings all the memories back. We’re trying to work on this Gangsta Musik 2. We’re going to get here and work on that. I’m ready. Right now, they’re putting us on the same venues right now to build that hype again. We just dropped the “Problem” video. We got another video we’re about to drop. We coming. I’d love to do a Ghetto Stories 2. Right now, I’m just focusing on my life stories movement.”

“I can’t say that [how C-Murder recorded music behind bars] because he’s in jail. We made it happen. We recorded a CD called Penitentiary Chances. It’s basically what we were going through. His case is bullshit. I read his case and they have nothing on him, but he say, she say. He was tall with golds in his mouth. You know how many people are tall with golds in they mouth in New Orleans? No gunpowder residue on his hands. Bad case. He’s C-Murder and they made an example out of him. He’s been fighting for fourteen, fifteen years. He’s in a bad parish who hates him and had another case in Baton Rouge that they kept showing on the news that I feel his lawyers should have made sure it was never released to the public because that’s what got him convicted. The footage from Club Rags. He wasn’t even on trial for that. You showing this every time his trial comes up. To a jury, you just painted that picture. This has nothing to do with what happened at this bowling alley. He got the bad end. I think Master P is back on his team and they’re getting some people from the Shapiro Law Firm. We’re going to try to get him out and fight for him. I want to see him home. He was my cell partner for about two and a half years. When you that close to somebody for that long, he becomes like a brother. Y’all with each other every day, we worked together as our jobs were together. Both of us worked in the kitchen. I just want to see him home. Louisiana has a bad judicial system.”

“Naw. I feel like the police take it too far. I think they take the badge as something they can get away with when they do crime. You see it. They’re shooting us down. We got cameras now. At first, we didn’t have camera phones. Now we catching them and they’re still walking. A lot of them are still walking because they have that badge. There are unbreakable laws that they feel they can break and it’s not right. I never liked the police. My daddy made me not like the police. I was schooled to hate the police by my father. I saw my father go to jail by the police when I was young. I was born this way. I was born with a cross on my back for the police. I don’t like the police. And I’ve been having run-ins with the law. I bust a police car window in when I was nine-years-old. That was my first time. He gave me a wedgie and roughed me up. I was getting money off of him until I was eighteen. I just don’t like the police. They got some good ones out there, but they got some crooked ones that make me feel that way about all of them. They got some real good police officers who really do their job and are really here to protect and serve. Then, they have some out here really ready to kill and destroy. You gonna see us thugs and run into us in the streets. If you can’t handle it or afraid, you shouldn’t be no cop. If you afraid of us, you shouldn’t be no cop.  If you have that much anger to shoot somebody who just standing talking stuff to you or got a six-inch blade in his hands to be shot down. Either you’re evil or you scary than a muthafucka if you think a six-inch blade is going to kill you with a loaded .45 in your hand. You killed him on purpose.”

Crooked Baton Rouge Cops & How His Children Feel About Them

“They hate them too. The kids hate the police too.”

“That’s why I got out of there. The six or seven months I was allowed to switch my parole, I went to Atlanta. I didn’t really have to tell my kids to hate the police. My kids were in the car with me when they would stop me every day. They would pull me over every day. They even cut up my seats. All kinds of crazy things. I was a target and Baton Rouge isn’t that big. When you Boosie you’re making songs about the police, I’m driving foreign cars and stuff like that, I’m a target. Those cops had it in for me. I go to Atlanta, I haven’t been pulled over yet. I’ve been there over a year and a half, I haven’t been pulled over for anything outside of taking a picture. It’s plenty of Rolls Royces out there. I don’t stand out. They don’t have dudes who hate me because they had the same chances as me and I blew up. It was a smart move for me. I couldn’t be in Louisiana anymore.”