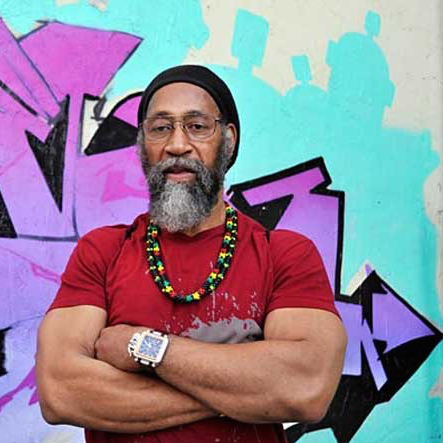 The story for American music genres such as jazz, rock n’ roll, blues, disco, and house have many origins or various fathers to their existence. The same could be said for rap music and Hip Hop culture. From the spoken word format in poetical rhythmic cadence to drum beats dates back to the storytelling of village griots in ancient Africa, the black Christian church call-and-response exchange between the congregation and the preacher, through Louis Jordan’s 1940s swing band era classic “Caldonia,” Gil Scott-Heron’s iconic song “The Revolution Will Not Be Televised,” to the present in Kendrick Lamar. But the consensus amongst historians, music purists, and those who lived in the New York City in the early 1970s that American deejay culture and the sound of Hip Hop was definitively burgeoned by none other than Clive Campbell, (aka DJ Kool Herc).

The inventor of Hip Hop as we know it took his upbringing on fervent listening of Jamaican dancehall soundclash and monstrous sound systems to make it fashionable for his neighboring youth residents of his South Bronx to dance and collect records of the funk and progressive rock tunes that he spun at his park jams around the city.. Basically, if it were not for his invention of his signature “merry-go-round” technique that blended to funk breaks and various other genres that matched in beats-per-minute on two turntables and a mixer to keep the party rocking all night to the break a dawn, it can be argued that there would be no “crate diggers” like J. Dilla, DJ Quik, Grammy Award darlings like Dr. Dre, Mark Ronson, Kanye West, DJ Premier, and thousands of other hip hop luminaries who are well respected as repositories of musical knowledge, and who have made millions of fans and dollars alike in doing so.

The influence of the American Dream is the world’s greatest export. And Kool Herc was a purveyor of that dream for many via his discovery in the art of turntablism in the recreation room of his family’s former South Bronx tenement building on 1520 Sedgewick Avenue. After a small hand-written makeshift flyer to promote his first deejay did forty-two years ago, and for what has grown to become a multi-billion dollar industry, Kool Herc spoke with much vigor to HipHopDX about the culture that he started and its indelible influence on Hollywood and the world of business. He also gave his thoughts on presidential candidate Donald Trump’s rhetoric on immigration laws, and why he’s not bitter with Hip Hop today.

DX: It’s an honor to speak with you. Have you seen the new Straight Outta Compton film?

Kool Herc: Nah. I look at that as an extension of my product. No malice, no jealousy. That’s my product. Why am I gon’ knock it? They are all my children. Respectfully to those who have all grown into manhood. And all the falsehoods that Hip Hop has been given, and that negative stuff, when Hollywood comes knocking it means something. That means that we gotta get our goddamn shit together. Okay? Stop that fuckin’ around. And I don’t mean anything bad because I’m cussing. Stop that unnecessary unwanted attention. We don’t need that. Hollywood wants commerce. We don’t want liabilities. We better start looking at and check some people that’s running around and making it look fucked up. That’s all. When Harry Belafonte came to New York and brought us to Hollywood with Beat Street, that says something right there. But Hollywood didn’t want the derogative stuff for awhile after that, so they backed off a little bit, too. But guess what, we got some Academy Awards, regardless. Sure we’re in there now, but we still gotta get our shit together.

DX: And there is something to be said about the fact that Hollywood came knocking, and now NWA’s albums are now back on the charts.

Kool Herc: That’s all my family. It’s a family affair. One child grows up to be a child who loves to learn. It’s not gangsta music. It’s oppression music. That’s the meaning of “gangsta” music, to make it look good. They are selling sensation. If it don’t bleed, it don’t lead! It ain’t about a good thing. We keep on feeding that negative stuff, that’s what they want. There’re a lot of good kids who could do a lot of good things. But if it’s fucked up, it’s gonna get more (unnecessary) attention. It’s like my mother used to say “Don’t run with that Lil Johnny right there. Don’t run with him. Don’t fly with the crows.” (laughs)

DX: From what I’ve read about the time when you started spun your first party in 1973 in your South Bronx apartment building’s rec room, there seems to be a parallel between the economic and political conditions today. Would you agree?

Kool Herc: I gauge things like in Hip Hop like wrestling and the fight club. Wrestling came from a back alley sport. Back, alley, sport. Where they at now? They’re a business. So it’s not a back alley thing anymore.

Kool Herc: Right. That WWE came from the back alley shit to where they’re at now. Same thing like that fight club. That was a back alley sport, then it became a business. Same thing with the battle emcees. Business. I can’t knock all the stuff in the business. But at the same time, too, for us to get in there and build off it, we do have something But clean it up.

DX: When Hip Hop started in the early seventies, right wing politics was prevalent in mainstream media news. Now we have Republicans like billionaire Donald Trump currently leading in polls for the 2016 presidential election. Do you find Donald Trump’s agenda on immigration law to be a threat to diversity in society?

Kool Herc: For what? He speaks what he’s supposed to speak about. He got money. Hate him or love him, or whatever, he will never have to stand in a Muthafuckin’ breadline. (laughs) And he’s saying things that quite a few folks won’t say. Those silent majorities are keeping him down. He’s a businessman. He ain’t no thug. Gimme something, Donald. I’ll work for you! Gimme something. I got nothing to do with that other stuff. I’m gonna bring it back to the neighborhood that needs that Trump money. I’m not down for that color shit what he’s saying. He’s saying what he’s supposed to say. But I’m gonna tell you what he’s supposed to do because nobody has said it yet. Have the training be on the border. Make the border for military practice. (laughs) I paid to come here. I paid. It’s the only place in the world, only in America. There is no other place than here. Take it from the man himself, Don King. “How sweet it is.” There is no other place than here. You can come here, but come the way I come and pay. But I go to Italy and want to work at a hotel, (imitates receptionist) “Excuse me, let me see your documents.” Just like that. Ain’t no different here, you go anywhere and they want to see your documents. You ain’t got it, ain’t no camp you’re going to. If you don’t have the legal shit, then you’re outta here. I’m telling you this should be no different here either here.

DX: This is an interesting take on this topic, being that you are a former immigrant to this country from Jamaica.

Kool Herc: Exactly. I ain’t no racist, I ain’t got no time for that kinda stuff. I’m coming from a legitimate… Look, I got good Mexican friends. I got a lot of good people. Everybody got some fucked up people in their circle. The only thing I got a problem with is the broad statement. Those broad statements he made are fucked up. I ain’t going to co-sign everything. (laughs) But he could afford it. People want him (Trump) to apologize for the broad statements, and that’s all they want. Because they want a man as president to take care of them. They don’t want just meat on the bone. Cut through that bullshit.

DX:  I read in a recent interview that you really enjoy several hip hop artists today, namely Chris Brown who you consider one of your favorites ever.

Kool Herc: I love Chris Brown. I love Breezy. I dance to him. I dance. I was out here dancing with the crowd, and then take that energy behind the turntables. That’s always of the interest of what’s on the floor.

DX: So you’re not part of the element of people or older generation of Hip Hop that considers today’s Hip Hop isn’t like what it used to be. You don’t seem too bitter in that way.

Kool Herc: No! Hip Hop is about youth, and being young at heart. I never get caught in a generation gap. I got the mentality of a rookie. I always gotta have that. If I fuck it up, then bring it back (laughs). That’s all. It’s a fun game, man, or “oooh’s” and “ahh’s.” No pain. You better check that shit at the door. Don’t bring that shit up in here.

DX: So who do you feel is the best DJ today?

Kool Herc: I let the record breathe. That’s it. That’s the gripe from the dance floor. Let it breathe. I recognize people who do that. That’s Kid Capri’s style— the hardest working man in the DJ business. That’s his style. Be your own self. I’m not Kid Capri, and I’m not knocking him. I respect him, but he ain’t me, and I ain’t him. And I ain’t trying to be him. He just elevated the game as far as what it’s supposed to be for entertainment. Not that fake shit. And all of you making records, stop dry snitching on yourself. Stop fuckin’ showing off. Y’all ain’t gangstas. Gangstas don’t believe in followers. Own a business.

DX: You were the first Hip Hop star to embody your nickname, Herc, or “Hercules” for short. Can you talk about that?

Kool Herc: Well, my father was a bodybuilder.

DX: Oh, so the beast mode in the gym runs in your lineage?

Kool Herc: Yes. And I played ball, too. God rest Darryl Dawkins soul because he was one of our heroes of the ball game, just like The Doctor J. A lot of people didn’t know that my name came from playing ball. If the hydraulics was working, I’d be out there. But they ain’t workin’ right now. (laughs) Like my man Clint Eastwood used to say, “A man has to know his limitations.” So I know my limitations. I remember the glory days when I was ripped.

DX: Here we are soon heading into fifty years of Hip Hop culture. So what would you say the best era in Hip Hop was, or is?

Kool Herc: The best has yet to come. That’s why we gotta get our shit together. And just like Chuck D said, “Minister Farrakhan’s a prophet that I think you ought to listen to.” So be it, so true. But Minister Dr. Umar Johnson is someone I think we all should listen to right now. Look him up. And he got a DVD called 7 AM. I and David Banner did something with him, and Dr. Claud Anderson out in Brooklyn. Real stuff. real people, real talk. I’m about a solution. I’m not about not knowing what they fuck we’re doing. I want to change that shit, leave something behind, own something. We always are about reacting. Stop that. Let’s do something.