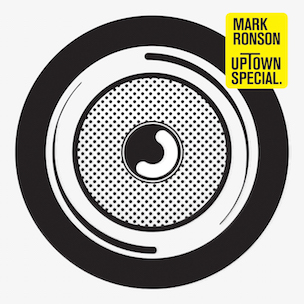 If looking for Mark Ronson to give you a whole lot more of easily accessible pop, it’s not here. All of the aforementioned work of the past decade of his career is pop alchemy, whereas much of Uptown Special is more in the vein of great music for music’s sake. “Uptown Funk” and “Feel Right” have all of the earmarkings of Ronson’s old school-drenched legacy though, which is going to suck in ears and open wallets. However, as a whole this album leans more toward “album cut” instead of “top-40,” which given that in the five years that Ronson’s waited to release an album overall physical album sales have dropped 32.2% overall (379 million to 257 million), makes giving this one a stream and maybe buying the two well-regarded singles sound like a great idea.

In discussing the making of Billboard hit single “Uptown Funk” with The Guardian, Mark Ronson reveals that things weren’t exactly working as planned.

“We did 45 takes of it and I just couldn’t get it, it sounded like horrible bullshit, so we went to lunch, walked down to a restaurant. Everyone was saying: ‘Dude, what’s wrong with you? You’ve gone totally white.’ Because I was going on pretending everything was just fine; you don’t want to admit that you’re just not there, you’re not where you want to be. And I went to the toilet and just … fainted. I threw up, and fainted. They had to come and carry me out of the toilet.”

He’s the man who turned what felt like Lily Allen’s irreverent blog posts of lyrics into Pop gold, and somehow shoved the spirits of all four Shangri-Las into the body of one Amy Winehouse. As a collective mainstream Pop audience we expected neither of these left-of-center developments but ravenously appreciated both. As well, he resurrected the sound of Duran Duran. However, on Uptown Special, he does none of that. Instead he slings heat, buckle high, and dares anyone to swing. It’s a strike, actually eleven strikes, three outs plus a little something more for good measure.

Key to this album’s execution is that Ronson’s most comfortable when working as a throwback artist with classic inspirations that has access to modern tools. Thus, hit single “Uptown Funk” apes the space between where Zapp and Roger owned synth funk, and where Prince invented the “Minneapolis sound” and took mainstream pop to another level. Bruno Mars on the vocal is a modern tool, but Mars is certainly not in need of auto-tune. This one is honest and pure, a strange beacon in the electro-pop neon dotted top-40 darkness.

There are other amazing “modern throwback” vibes here, too. Mystikal gets cast as a gut-bucket Southern soul singer-as-rapper on “Feel Right.” Whether you think he’s more Wilson Pickett or Rufus Thomas, it’s still an update on a classic standard with a modern twist. However, past Mystikal and Mars’ inclusions, this is not a traditional mainstream Pop album. Hooks, choruses and easily digestible songs under five minutes aren’t here. For instance, note that Stevie Wonder doesn’t sing songs or compose melodies here, he’s called in to bless album opener “Uptown’s First Finale” with his harmonica. Uptown Special finally zags and totally embraces feeling “old,” whereas Ronson’s sound has always blended old and new styles and sounds.

Paul McCartney’s post-Beatles work in Wings is also tapped on this most unique of soulful album excursions. Jeff Bhasker getting credit for the laid-back and country-fried “In Case of Fire” allows us to recognize his genius in full. As well, “Leaving Los Feliz” sounds bright and bold with thickly laid rock grooves and pop melodies (“Leaving Los Feliz” even has a hint of The Beatles’ “Lady Madonna” in the bassline for good measure). Those album tracks define the album’s boldest move and also its greatest victory. When a recording successfully dives into such unique inspirations, it makes breakbeat driven and well-executed tracks like “I Can’t Lose” sound miscast and best saved to be pitched as b-side material for Pharrell’s next album.

Mark Ronson successfully made an album that feels like classic Pop stars showcasing their skill, yet also attempting to sort out their own brilliance to discover what’s next. Thankfully, instead of stressing out and failing at creating something progressive and breathtaking, Uptown Special plays it cool. Instead of blending new paints with old canvases to create his albums-as-portraits, on this release he also decides — for the first time — to just use old paints on new canvases, too.

Mark Ronson fans appreciate “modern throwback R & B,” but may have a rough time with just “throwback” R & B sounds. Resting after crafting girl group revivals, he instead made a song ideally meant for the Super Bowl halftime show, and ten songs equal to (or well crafted enough to meet) that standard. As largely the creative inspiration for this album, the 1970s were a weird time in pop music. Soul had expanded to shadow all other genres. Thus, in digging into this as a guiding concept by which to create in 2015, Ronson and company created an album that’s accessible by all, a little bit of everything that everyone wants to hear.