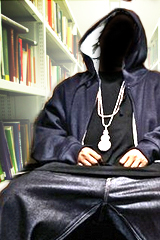 The recent U.S.D.A. (Young Jeezy & crew) album has really got me thinking about this whole corporate thug idea. Can one be corporate and thug at the same time? It’s a good question…one worth debating, especially by people like me who are neither.

I am an academic, a professional scholar who makes a living teaching and doing research. At 27, I’ve spent nearly 5 years in higher education, and I’ve seen a wide variety of types of students: wealthy, broke, black, white, young, old, talented, & obtuse: you name it. Add those years to the four that I spent as an undergrad, and you’ve got almost a decade of college experience under my backpack. I’ve seen kids from North Jersey who own G4s and kids from North Chicago can’t even spell G4. Trust me when I say that I’ve seen college students from every walk of life- each one of them special in their own unique way.

There is one student that makes me stare virtually every time I see him. He used to be hard to find but now I see him everywhere: in the cafeteria, on the football field and yes, in the classroom. He’s on campus, and he’s chillin. He’s enrolled in schools north and south, coast to coast. His name is College Thug. Oh you don’t know him? Let me point him out.

College Thug is that dude who you know is in your class, but that you rarely see in class. When you do, he’s in the back- usually texting or carefully concealing his iPod so that the instructor doesn’t notice he’s not tuned-in. He’s the one in the 6X white tee and fresh airs, (which match his NFL hat selection of the day) who can’t afford the textbook. For all practical purposes in class, he’s a zombie. Answering a question or participating in a discussion is absolutely unheard of; leaving right before class ends is routine.

Ahh…you do know him. I thought so. As a professor at a southern HBCU, I used to ask myself the same question over and over again: Why?

Why is College Thug wasting his time, energy, and money on college when he so clearly would rather be doing something else with his life? For the longest time I couldn’t figure out what it is that makes otherwise gifted young brothers feel as though they absolutely have to do something they actually hate: go to college.

Until I met College Thug personally.

It was last semester, and College Thug was in my class. He came through occasionally, just enough to know when exams were scheduled and that sort of thing. He never said a word- as far as I could tell, he didn’t speak English. His scores were low, his writing embarrassing. About midway though the semester, after failing exam #2 (out of 4) I was in the department one day when a fight broke out. It was College Thug. He was in a physical altercation with a female student, apparently over some disagreement they had in an earlier class. For a reason still unknown to me, I pulled him out of the drama and shortly thereafter had a chance to talk to him.

Turns out College Thug is a pretty smart dude. I won’t go into the details but it was clear that this kid possesses an understanding of the way the world works that is more sophisticated than most adults twice his age. He broke down the situation surrounding the altercation with a calm eloquence and objectivity that forced me to take his side. We ended up talking for about an hour, and during that time I seized my opportunity to ask him my burning question.

His response floored me.

That conversation gave me insight into what I now refer to as College Thug Syndrome. Thousands, if not millions of black students (men and women) are out there being forced to decide between two alternatives:

1. Go to college. Give up on your dreams. Follow the leader. Succeed.
2. Hustle. Do your thing. Be yourself. Struggle.

In order to understand College Thug Syndrome, you have to understand the economic role of higher education in our society. Last year, the average college senior graduated with more than $19,000 in debt. An increasing number of new grads carry student loans of $40,000 dollars or more. Some, much more. Here’s the kicker: Many new graduates find their loan payments are so big that they can’t save for other goals, such as owning their own home.

Can’t happen to me, you say? Consider this: With an 8% interest rate, each $1,000 you borrow will cost you about $12 a month to repay, assuming a 10-year loan. If you’re a student and you borrow the maximum allowed under current federal student loan programs — $23,000 in subsidized and unsubsidized borrowing for undergraduates who are still their parents’ dependents — your monthly payments will be around $276.

To put that in perspective, that’s $276 a month for 10 years just to pay for your college-jail sentence.

Many people agree that growing student debt is literally warping young lives, creating unrealistic burdens, and ultimately cheating the country. I’d argue that it also is to blame for College Thug Syndrome. Here’s how.

I believe that students are smarter than we give them credit for. They are aware (if even only on an unconscious level) that going to college to study something they hate only to get a job doing something they hate to pay for the college that they went to in order to get the job that they hate is asinine. When faced with the two options presented earlier, they come up with their own better solution, which lies somewhere in-between.

Ironically, each of the above mentioned individuals has a college fund where they donate to help kids go to college. Hell, Russell Simmons was in town last weekend to speak to college kids about managing their money! Not to mention Lil Wayne, who is reported to actually be in college despite being in the top 1% of earned income in the world.

The only option for College Thug then, is to view college as a backup plan to his real life goal of living out the rim-filled, champagne-drenched, party life being pumped though TV, Radio & Hollywood. This is why in any college-town in America you will find more kids at clubs on the weekend then in classes during the week. This is why more students at any school anywhere can sing “Party Like a Rock Star” than can sing their own alma mater. And yes, this is why students enroll in classes that they don’t want to take and then show up acting as if they don’t want to be there.

Get your mind right: college is not for everybody. There is nothing wrong with coming up with a personal gameplan for success that doesn’t include dorms and student loans. The list of millionaires & billionaires and who didn’t go or dropped out of college is too long to even start here. It is pure mind control to even suggest that a college degree is the only key to success.

And no, Dr. Sims is not saying that college is bad, or that kids should stop going. College is great. I’m simply saying that if you don’t want to go, maybe.you.shouldn’t.go. Doing that will only waste time, energy and resources that could’ve been used a lot more wisely. Students should stop being afraid to follow their dreams just because those dreams may not include “higher education.”

Until they do, College Thug is here to stay.