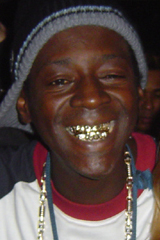 History of the Grill

Who shot JFK?  Are there aliens at Area 51?  Did Bush really knock down the towers?  These questions have spawned too many conspiracy theories to mention.  But all of them combined don’t add up to the number of theories circulating about the origin/meaning/significance of grillz.

Maybe you’ve heard this one:

During slavery, slaves were of course denied quality dental and vision health care plans.  However, on rare occasions, slave owners permitted rudimentary dental surgery to be conducted on their chattel.  This, of course, was reserved only for the most valuable male slaves, those that an owner could not bear to lose to death caused by infection related to tooth decay.  The slaves that received the dental work often had copper, tin, or sometimes bronze fillings for cavities and replacements.  The metal in their mouth became a status symbol denoting their value to the master, and their superiority to the average slave, i.e. the more metal, the more importance.  Showing one’s shiny “grill” became a way of notifying others (slaves, masters, etc) that you were important, and ultimately not to be messed with.

In the spirit of good-natured debate and dialogue I offer three of the more prominent theories regarding grillz and a brief psycho-historical analysis of the facts pertaining to each.

Theory #1: Grillz started in the south

The notion that people sporting gold teeth originated in the dirty south (Mississippi, Georgia, Alabama, Louisiana) is actually only a part of a bigger notion that reflects the idea that anything Black must have started in the south.  While this is largely true (largely, not completely) this theory is neither accurate enough nor precise enough to have meaning.  It is true that what you and I refer to as grillz today (using precious metal and or stones in place of teeth) has its roots in the dirty dirty.

This theory lacks accuracy because the south is HUGE and it lacks precision because grillz (today) doesn’t just refer to metal dental work.  In other words, claiming that grillz came from the south is a lot like claiming that Krispy Kreme™ came from France.  Sure, doughnuts came from France, but anyone who’s ever almost had a car accident trying to bust a U-turn upon seeing a “Hot Now” sign in the window can tell you that Krispy Kreme™ has revolutionized the doughnut industry.  My point is that what was French has changed so drastically that it can no longer (accurately) be called French anymore.  The same is true with grillz. Contemporary hip hop icons have taken grillz and turned it into something different all together.

Grillz (also known as fronts) slide over existing teeth and consist of metals and/or precious stones such as platinum and diamonds. Depending on the stone, metal and number of teeth to be fronted, prices can range anywhere from $50 to several thousand.  Predecessors to grillz weren’t easily removable and involved reshaping the tooth to accommodate a new crown, often in gold, silver or platinum.  Now, custom grillz require a dental mold upon which the metal and stones are mounted.

This one is just plain false.  Although Turk, BG, Juvenile, and Lil Wayne did give grillz a lot of exposure, they were not the originators.  There is much speculation as to who was the first rapper to rock a grill.

The grillz trend actually began taking shape much earlier- during the early 1980s.  Most people credit New York’s Eddie Plein (owner of Eddie’s Gold Teeth) for kicking things off.  Plein reportedly outfitted Flava Flav with a set of gold caps, who was eventually followed by a slew of other top New York rappers, including Big Daddy Kane and Kool G Rap. Plein then moved to Atlanta and began designing more elaborate (and more expensive) grillz for artists including OutKast, Goodie Mob, Ludacris and Lil Jon.

When the south exploded into the forefront of hip hop in the early 2000s, so did the grillz phenomenon. From there the grillz lineage can be clearly traced from Atlanta (see above) to Memphis (8-Ball & MJG) to New Orleans (No Limit, Cash Money), to Houston (Bun B, Paul Wall), to St. Louis (Nelly).  And of course, Bay area natives stake a rightful claim to the grillz tradition as well (Too Short, others).

Grillz have been a part of hip hop since the early days, and all indications are that they are not going anywhere anytime soon.  Like everything else hip hop, grillz are big business.  Companies are springing up all across the country that cater to the grillz market, with names like GotGrillz, GoldTeeth.com, and Mr. Bling.  With unlimited advertising supplied by the legions of artists rocking grillz (I saw one on Regis and Kelly the other day) the grillz movement may not even be at its peak.

Of course, there are haters.  School districts in Alabama and Georgia have banned students from wearing grillz in the classroom, and similar measures are being planned in Texas. Apparently some educators aren’t cool with students wanting to Rob the jewelry store and tell them make me a grill.  And let’s not forget those pesky dental health advocates who point out the health risks associated with having foreign metal objects in your mouth for long periods of time, such as cavities, gum disease and even bone loss.

Grillz may be here to stay, but this is one bandwagon you won’t see me jumping on.