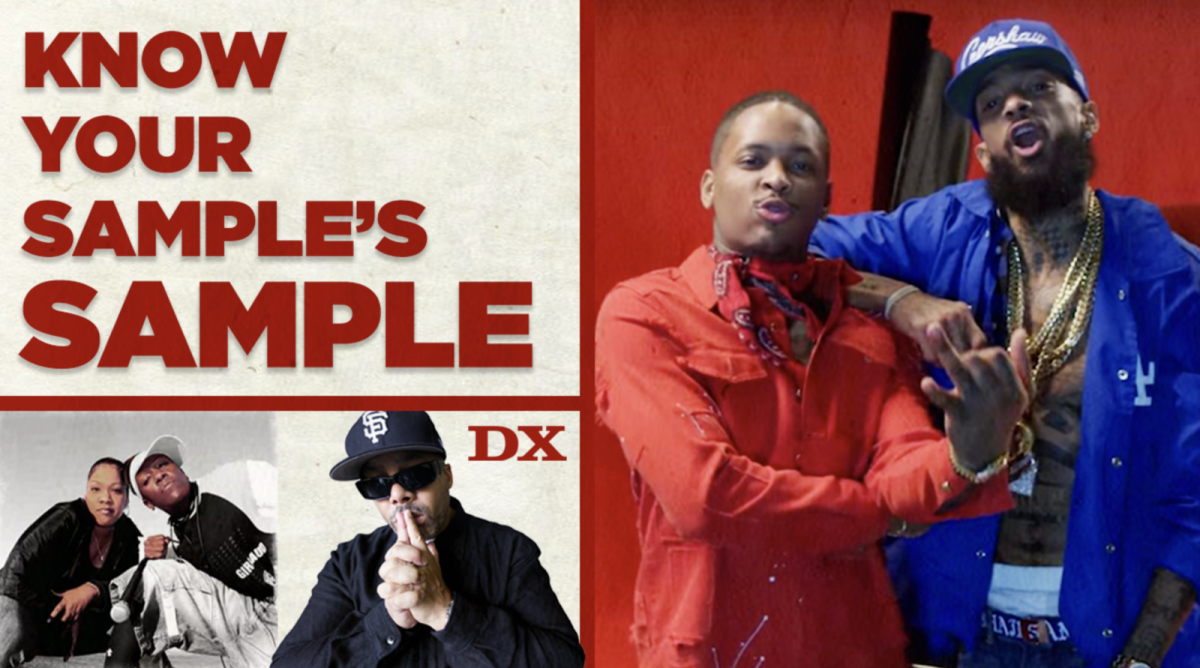 Welcome to Know Your Sample’s Sample, a HipHopDX series that breaks down popular sample-based chart-toppers of today and shines some light on the original hits that helped mold them.

For the inaugural deep dive, we’re going to examine how Bay Area Hip Hop OG Paris, Compton spitter YG, the late Crenshaw king Nipsey Hussle and fearless East Oakland duo The Conscious Daughters intersected at a time when Hip Hop was being dragged out of the Barack Obama era kicking and screaming.

Both before and during Donald Trump’s four years in the Oval Office — or at the golf course — the phrase “Fuck Donald Trump” became a rallying cry for countless Americans, including rappers. Among one of the most infamous “FDT” anthems arrived in 2016 courtesy of YG, Neighborhood Nip and producer DJ Swish, several months prior to the presidential election.

Released on March 30, 2016 and included on YG’s Still Brazy project, the unapologetically aggressive track came with an accompanying video, which in retrospect posed an eerily prophetic question: “2016 will be a turning point in this country’s history. The question is … in which direction will it go?”

Like Dorothy in The Wizard of Oz, America was put through a cyclone of division and disease, then dropped on its head and forced to deal with the ugly aftermath. As Joe Biden’s administration attempts to pick up the pieces of Trump’s handiwork and get the raging COVID-19 pandemic under control, “FDT” still rings true for many.

But the song was in danger of becoming another copyright infringement casualty until Def Jam Recordings came knocking on Paris’ proverbial door.

“Def Jam approached me about getting clearance for that release,” Paris explains to DX. “The music for ‘FDT’ is from a song I wrote and produced called ‘Something to Ride To (Fonky Expedition).’ It was for The Conscious Daughters, a group I released in the ’90s on my then-label Scarface Records.

“I was unaware it was out and being performed worldwide when Def Jam decided to hit me up. We worked it out, though. It’s cool because that music continues to be used in the way it was originally intended — to be subversive and to continue to push the line calling for justice and equality for us.”

Although Paris was momentarily annoyed, he says he “shrugged it off” and kept it moving, explaining, “It wasn’t emotional for me — I’ve long since been over that. Plus, I’m always down to apply pressure to a major label [laughs]. But really, it was good to see material I created used for that message by a newer artist. Shit was big.”

Paris produced “Something To Ride To (Fonky Expedition)” for The Conscious Daughters’ inaugural album Ear To The Street in 1993. And with an ear for the gangsta rap that was emerging out of Los Angeles, The Devil Made Me Do It MC set out to apply that same raw, unbridled energy to The Conscious Daughters’ Carla “CMG” Green and Karryl “Special One” Smith.

“That song was The Conscious Daughters’ first single and introduction to the world,” he explains. “I created it to emulate the feel of Dr. Dre’s ‘Nuthin’ but a G Thang,’ which was poppin’ at the time. The music was an easy vehicle to allow the group to present a strong, assertive woman’s perspective in Hip Hop and to make hardcore street shit that emphasized female unity and showcased rhyme skills instead of sexuality.

“Its creation was simple — I referenced the call and response wordplay between Dre and Snoop and crafted the track and lyrics around that same approach.”

YG and Nip were presumably aiming to execute a similar feel when they built “FDT.” As YG explains in the intro, Trump’s reputation went from successful business tycoon — and off-color reality television personality — to self-serving racist seemingly overnight.

“Just when I thought it wouldn’t get no sicker,” he spits. “Woke up one morning and heard this weird ass muthafucka talkin’ out the side of his neck/Me and all my peoples, we always thought he was straight/Influential muthafucka when it came to the business/But now, since we know how you really feel/This how we feel.”

The chorus then erupts into a cascade of “Fuck Donald Trumps” before Nip comes in with, “Donald Trump spent his trust fund money on the vote/I’m from a place where you prolly can’t go/Speakin’ for some people that you prolly ain’t know/It’s pressure built up and it’s prolly gon’ blow.” 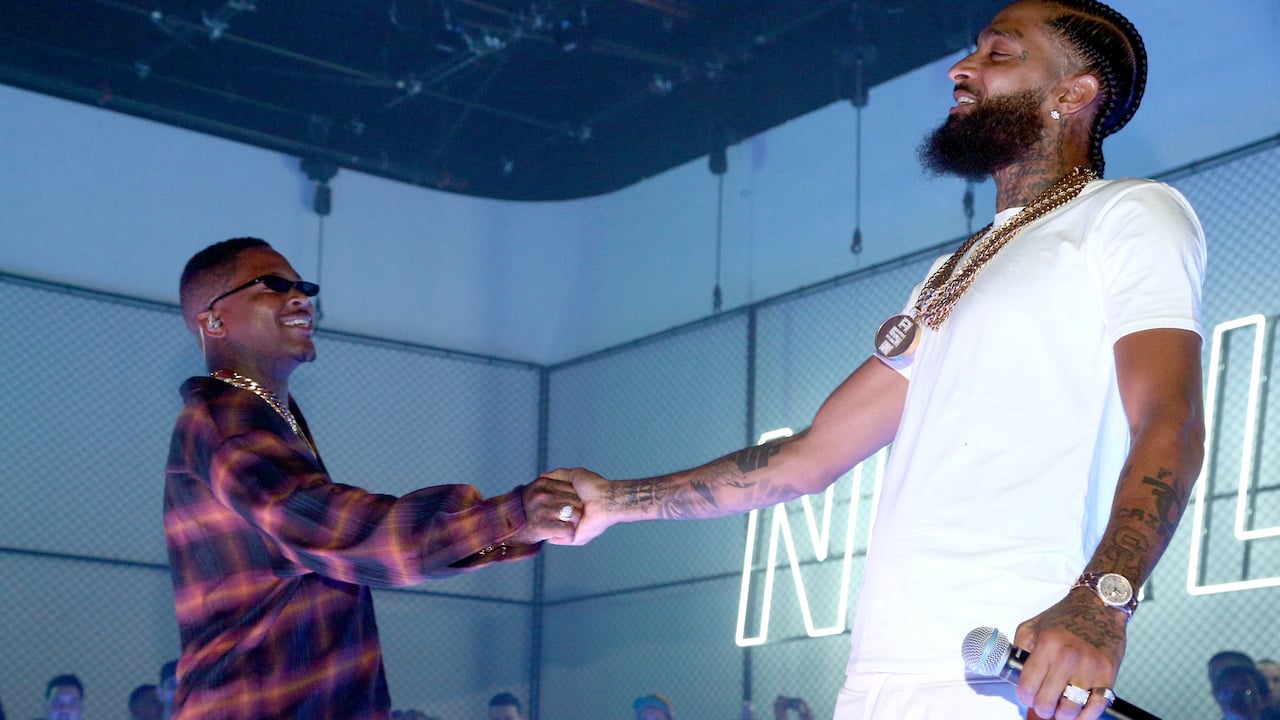 With “Something To Ride To (Fonky Expedition)” as its anchor, “FDT” peaked at No. 50 on the Billboard Hot R&B/Hip Hop Songs chart and No. 10 on the Bubbling Under Hot 100 Singles chart, while the video has racked up over 32 million YouTube views. It also saw remixes from G-Eazy and Macklemore, which added additional verses about Trump’s comments on banning Muslims in the United States.

On November 7, 2020 — the day Biden was finally declared the winner of the 2020 presidential election — the song tripled in sales and topped the iTunes chart as people around the globe celebrated the historical win.

While Def Jam did legally clear the sample, “FDT” is indeed another cautionary tale. As Redman told DX last September, not getting the green light can cost an artist thousands of dollars, something Nicki Minaj learned the hard way when she was sued by folk singer-songwriter Tracy Chapman for an authorized sample of 1988’s “Baby Can I Hold You.”

“It’s important to know everything,” Paris says. “As with anything, the more you know, the further you go. On a basic level, knowing sample origins can prevent artists from getting the call no act wants to — from a rights holder with a copyright violation notice. Claiming ignorance of the law or of a sample’s origin is not a defense and the financial penalties can be severe, especially if it can be proven the usage was intentional.

“Creating original material — and ownership of that material — is key. Besides, any producer worth anything should have a musical frame of reference and a depth of knowledge of material that was created in the past.”

As for The Conscious Daughters, the duo released two additional albums, culminating with 2009’s The Nutcracker Suite. Sadly, Special One was found dead in her home in 2011 from complications associated with blood clots that reached her lungs.

“They did well,” Paris says. “They had a good run, then Special One passed away. Rest in peace. When they were on my label, they benefited from in-house writing and production and attention to detail that most other labels were unwilling or unable to provide. That mattered. Then they went through a label change to a label that was in the process of changing itself. But overall, they made their mark and got love for the statements they made and the vibe they put out.”

Paris has yet to speak with YG but is open to the possibility, saying, “I’m always down to build. I’m good with anybody that’s good with me. People seem to think they need to be on a certain page for us to be good, but that’s not always the case. Just be thorough and we’ll be straight. Ownership of what create as artists is key.”

Know Your Sample’s Sample is a weekly HipHopDX series that dissects some of Hip Hop’s most iconic hits.