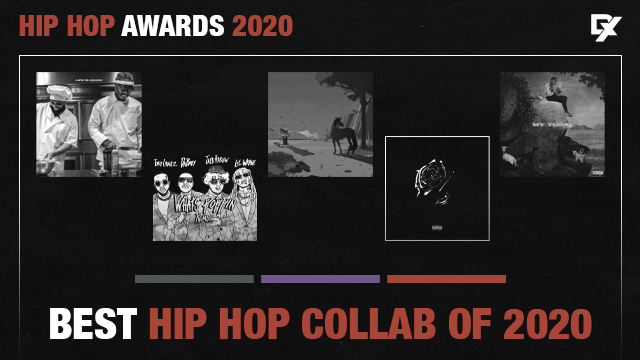 Although 2020 was a year of social distancing, the art of Hip Hop collaborations didn’t skip a beat. A diamond-selling team-up had us thinking “Life Is Good” lyrics were true — until the world was flipped upside down. And Jack Harlow help make remixes great again with his joint “WHAT’S POPPIN (Remix)'” being one of the many star-studded rap collaborations that illuminated the treacherous year.

Whether it was a high-profile Drake feature or just an organic pairing, here are the best rap collabs of 2020.

Here Are The 2020 Best Collab Nominees

Drake and Future reunited to come out of the gates hollering “Life Is Good,” but has a song title aged worse in the tumultuous year that is 2020? The OZ-produced cut would’ve reigned supreme on the Billboard Hot 100 for months if it wasn’t for Roddy Ricch’s “The Box.” Even five years after their seminal What A Time To Be Alive joint effort, the 6 God and Hendrix still show they remain atop the rap zeitgeist entering a new decade.

While Megan Thee Stallion’s 2020 has been an emotional rollercoaster, she’s powered through to be nominated for HipHopDX’s Level Up Award and Rapper of the Year. Her cherry on top came in the form of an assist from one of her idols in fellow Houston native Beyoncé. Queen Bey put her rapping pants on to bless the ferocious women-empowerment “Savage (Remix)” in April and the anthem ended up topping the Billboard Hot 100.

Every superhero needs a good sidekick — and that’s what Lil Baby has in his 4PF signee 42 Dugg. “We Paid” quietly arrived on the My Turn deluxe in February, but Dugg’s signature whistle grew more and more ubiquitous to the point “We Paid” became a bona fide song of the summer candidate. The minimalist heater even cracked the Hot 100’s Top 10 in July.

These days, remixes can feel monotonous and as if artists are just going through the motions to compile streams. Jack Harlow took a throwback approach with Lil Wayne, DaBaby and Tory Lanez joining him for a lyrical sparring session on the “WHATS POPPIN (Remix).” Harlow adds a bristling verse while Weezy, Baby and Tory attempt to eviscerate the piano-driven JetsonMade production. Hopefully more rappers follow in the Louisville native’s footsteps when it comes to remixing their hot tracks.

When Pop Smoke tragically passed away in February, 50 Cent made it his mission to help assist Pop’s camp in crafting the perfect posthumous debut album. With Pop interpolating his 2005 hit “Candy Shop,” it was only right for 50 to hop on the Spanish guitar-tinged production of “The Woo.” He then called on another rapper who made the quantum leap to stardom in 2020 with Compton’s Roddy Ricch to complete the three-man-weave.

All three of these rappers saw new levels of success in 2020 and when combined on the same track, it was an automatic hit. RIP Pop.

21 Savage and Drake connected for this lighthearted hit to close the year off strong. Drake’s verse even sparked some controversy after his SZA name-drop.

“Something To Rap About” – Freddie Gibbs f. Tyler, The Creator

Hearing Tyler and Freddie go back and forth over the silky smooth Alchemist production was enjoyable from start to finish.

Whether you loved or hated the video, Cardi and Meg had everyone talking about “WAP” this year.

Two of our Rapper of The Year nominees showed off why they were at the top of the game in 2020 with this collab.