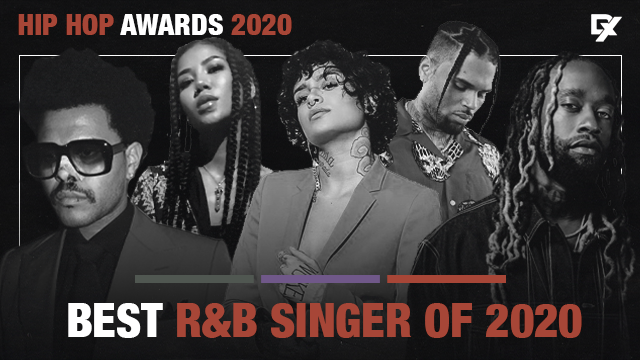 It’s hard to recall a period when the talents of R&B artists and the warm vibe of upper echelon R&B albums was more crucial. A handful of R&B singers stood out amongst the rest in the face of a year that can be described as nothing less than the most universally emotional roller coaster ever — blessing us with undeniable R&B music soundtracks for the soul.

Despite being criminally slept on in the nominations for the 63rd Grammy Awards, Abel Tesfaye had himself one hell of a year. He only had a small handful of guest spots. Still, they were especially poignant — finding Billboard Hot 100 success with Colombian singer Maluma and Calvin Harris (“Hawái (Remix)”), Ariana Grande (“Off the Table”) and the late Juice WRLD (“Smile”). However, he saw the most success on his own accord with his fourth studio album, After Hours, which debuted on the top of the Billboard 200. It included the hits “Heartless” and the undeniable smash “Blinding Lights,” which peaked at No. 1 on the Hot 100 and spent 51 weeks on the charts. It also earned him a grip of platinum plaques across the globe, almost going diamond in Canada with seven platinum certifications.

Some of Our Favorite Singers This Year

HipHopDX has boiled down the top five R&B artists who dominated charts and playlists all 2020. Sing it up! Following 2019 that brought us (among other things) the 45-song behemoth that was the platinum-selling Indigo, Chris Brown stayed busy — as he habitually does — with a ton of big guest spots. He started 2020 on H.E.R.’s “Slide Remix” with the late Pop Smoke and Boogie Wit Da Hoodie. Throughout the year, he popped up on albums such as Jhené Aiko’s Grammy Award-nominated Chilombo alongside Snoop on “Tryna Smoke” (Remix)” and Drake’s Dark Lane Demo Tapes on the track “Not You Too.” However, his highlight remains his joint LP with Young Thug, Slime & B, which debuted at No. 24 on the Billboard 200. Most notably, the single “Go Crazy” peaked at No. 9 on the Hot 100 and earned Breezy two more platinum certifications for his wall. Three years removed from Jhené Aiko Trip LP, the singer made a splash in 2020 with features on albums such as Big Sean’s Detroit 2 and Ty Dolla Sign’s Featuring Ty Dolla Sign. However, she climaxed with the release of her third studio LP, Chilombo. On the back of five singles, three of which went platinum (notably the most successful of the bunch “B.S.” with H.E.R.), Chilombo became her highest-charting album yet, peaking at No. 2 on the Billboard 200 — and topping the R&B charts for the third time. It also earned her a pair of Grammy nominations for both Best Progressive R&B Album and Best R&B Performance for the collaboration “Lightening & Thunder” with John Legend. Oakland singer Kehlani has had a great year. She kicked off 2020 with a feature on Justin Bieber’s “Get Me” — the first single from his Billboard 200 chart-topping, platinum-selling LP Changes. Her year was filled with notable guest spots on records such as Ty Dolla Sign’s “Universe,” Megan Thee Stallion’s “Hit My Phone,” Jhené Aiko’s “B.S.” remix and even her ex YG’s Valentine’s Day single “Konclusions.” Still, the crown jewel was her sophomore studio album It Was Good Until It Wasn’t, which she released in May. Aside from being noticeably drenched in a more overt R&B aesthetic, it became her highest-charting release to date, debuting at No. 2 on the Billboard 200. It was also her second No. 1 on the Billboard R&B chart. Ty Dolla $ign may not have had the massive list of guest appearances we’ve seen in year past, but he put in a lot of work this year — and as usual, it’s all paid off. He found himself on some incredibly high-profile LPs such as Ariana Grande’s Positions (“Safety Net”) and Big Sean’s Billboard 200-topping comeback LP Detroit 2 (“Body Language”). He also got a Grammy nod for his guest spot alongside Mahalia on Jacob Collier’s “All I Need.” He also unleashed his third studio LP Featuring Ty Dolla Sign, three years removed from his sophomore effort Beach House 3. Featuring names such as Nicki Minaj, Kid Cudi, Post Malone and Kanye West, it debuted at No. 4 on the Billboard 200 200, becoming Ty’s first Top 10 debut of his career.

Nigerian singer Burna Boy had himself one heck of a year. Following the success of his 2019 Grammy Award-nominated fourth LP African Giant, he dropped his most successful album to date Twice As Tall, which earned him yet another Grammy nod — and peaked at No. 54 on the Billboard 200.

After two years of hype bolstered by 070 Shake’s debut EP and a handful of high-profile guest spots, the New Jersey alt-Hip Hop and ambient pop artist dropped her debut LP, Modus Vivendi — which peaked at No. 10 on Billboard’s Top Current Albums chart.

H.E.R. had nods at virtually every award show this year, including four wins (MTV Video Music Awards, MTV Europe Music Awards and Soul Train) for her single “I Can’t Breathe.” She also took home R&B Artist of the Year at the iHeartRadio Music Awards and Best R&B/Soul Female Artist at the Soul Train Awards.

Three years removed from his Billboard 200 Top 50 LP Drunk, Los Angeles-bred Thundercat returned with his highly anticipated album It Is What It Is. Dedicated to the late Mac Miller, the album proved his most widely hailed — peaking at No. 38 on the Billboard 200 and earning a Grammy Nod in the Best Alternative R&B Album category.

After publicly airing out grievances about her Kanye West-produced K.T.S.E., Teyana Taylor finally released her (very) long-awaited full-length debut LP The Album. The album peaked at No. 8 on the Billboard 200 and topped the R&B/Hip-Hop chart. She also scooped up a Best Director video at the 2020 BET Awards.

Grammy Award-nominated ATL duo Chloe and Halle Bailey made a splash this year with their sophomore LP Ungodly Hour, which peaked at No. 16. They also scooped up a Rising Star Award at the Billboard Women in Music awards. However, they remain an honorable mention on this list as they are a duo — not a solo act.