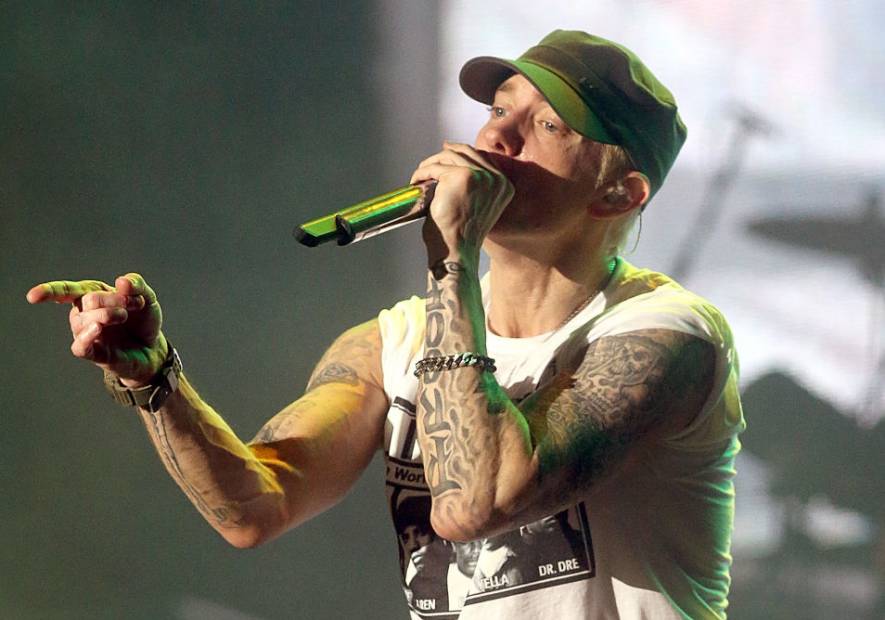 Eminem released Music To Be Murdered By on January 17, and while the album has received mixed reviews from critics, it’s set to be Em’s 10th straight No. 1 album on the Billboard 200 chart.

The album is what you’d come to expect from Eminem in this era: technically-impressive speed rap, dramatic production, outrageous quips and enough rage to make Chris Brown blush. Music To Be Murdered By can be considered technically better than Revival and Kamikaze. It’s more consistent, contains stronger features (Royce Da 5’9” is particularly sharp) and Eminem’s endurance across 20 tracks is commendable.

And yet, something’s missing.

Many successful rappers have been lauded for their duality. 2Pac was famous for it. T.I. ran with the concept for an entire album. Eminem has taken it a step further, fleshing out three sides of himself to make a fully-fledged artist. There’s Marshall Mathers the man, Eminem the rapper and Slim Shady, the wild alter-ego.

In his 2008 memoir, The Way I Am, Eminem described Slim Shady as an outlet for his anger, Eminem as a vehicle for his lyricism and Marshall Mathers as a channel for his sincerity.

“Slim, Em, and Marshall are always in the mix when I’m writing now,” he wrote in his memoir. “I’ve found a way to morph the styles so that it’s sort of all me.”

New York Times bestseller The Way I Am

However, on Music To Be Murdered By, the Detroit legend gives Shady and Eminem a wide berth, with barely any room for Marshall to breathe. It’s truly a shame. Behind the shock and lyrical prowess, it was Marshall Mathers, the humble, working-class kid from Detroit, who won the hearts of Americans.

As Anthony Bozza wrote in his 2003 book, Whatever You Say I Am: The Life and Times of Eminem: “The real Marshall Mathers, the one I met before the fame and have seen less of since is the most interesting side of him — he’s angry and sensitive, shy and curious. The real Marshall is who America is really consumed with.”

The only one who doesn’t seem to realize that is Marshall Mathers himself. Music To Be Murdered By is filled with Slim Shady’s vitriol aimed at rappers, the media and family. It also contains complex rhyme schemes that allow Eminem to flex his muscles as one of the most potent MCs on the planet. Even when Marshall shines through, such as when he raps about his late father on “Leaving Heaven,” he does so with such intense anger that it’s hard to separate Marshall from Shady. That may be the aim, but it leaves clear-eyed reflection to be desired, à la “Mockingbird.”

There are other moments where Marshall arises, most notably on “Never Love Again,” a brilliant metaphor for his past pill addiction. Eminem’s (relatively) calm delivery is a breath of fresh air on such a hyperactive album. Yet, even here, he’s rehashing well-worn topics, which leaves the question: what has Marshall Mathers been up to for 10 years?

It’s possible that Eminem thinks the answer to that question isn’t interesting enough. In Whatever You Say I Am: The Life and Times of Eminem, Em is quoted as saying that if people stopped writing about him, he might not have anything to write about. He goes on to say that without drama and negativity in his life, his songs would be “really wack” and “boring.”

Oddly enough, as both Eminem and Marshall, he’s proven that mindset wrong time and time again. Yes, his songs usually contain a fair amount of drama, but Eminem/Marshall is at his finest when he’s insightful (“Sing For the Moment”), compassionate (“Hailie’s Song”) or triumphant (“Lose Yourself”).

Whatever You Say I Am: The Life and Times of Eminem

The best moments on each of Eminem’s albums from the 2010s have been when he’s allowed Marshall room to maneuver. “Not Afraid” was Mr. Mathers stepping up a new, sober man on Recovery. “Headlights,” on The Marshall Mathers LP 2, was a heartfelt apology to his mother, and resulted in his best song of the decade. “Castle” and “Arose” reimagined his 2007 overdose to a heart-wrenching, then triumphant, effect on Revival. “Stepping Stone,” an Eminem-Marshall hybrid that functions as a reflection on the end of D12, remains the most memorable song on Kamikaze for its earnestness.

As evidenced on “Premonition,” the introduction to Music To Be Murdered By, Eminem still pays attention to his critics to a fault. He has nothing left to prove, and yet he still spent another album settling scores at light speed. If he cared less about the buzz surrounding his music, maybe we’d get to hear more personal tales of Marshall Mathers, the 47-year-old father. With 4:44, JAY-Z made a masterpiece of a grown-man album out of his infidelity and love for his family. In doing so, he proved dad-rap is a thing, and yes, it can be gripping.

Slim Shady propelled Eminem to stardom. He was part of Eminem’s youthful exuberance. But, Em made a wise choice in retiring his Shady persona on 2005’s “When I’m Gone.” That’s where it should have ended. At 47, he’s too stately for such extremism, too weathered for such cartoonish rhymes.

Music To Be Murdered By is more than an hour-long, and we learned very little new about Marshall Mathers. What does he think of Hailie being in the internet’s spotlight? How does he feel about passing the torch to Griselda? What else is going on in his life that we don’t know about, that would make for compelling music?

In Whatever You Say I Am: The Life and Times of Eminem, Em gives his thoughts on retirement. “I’m gonna stop when I have nothing left to say,” he says. “As soon as I don’t feel it, that’s it, it’s over.”

Maybe he really does feel all this anger. Maybe.

But, it’s hard to believe there’s not more to the story. If Marshall Mathers is willing to show himself, another album is more than welcome.

If not, it’s time for Eminem to be true to his word and put the mic down.