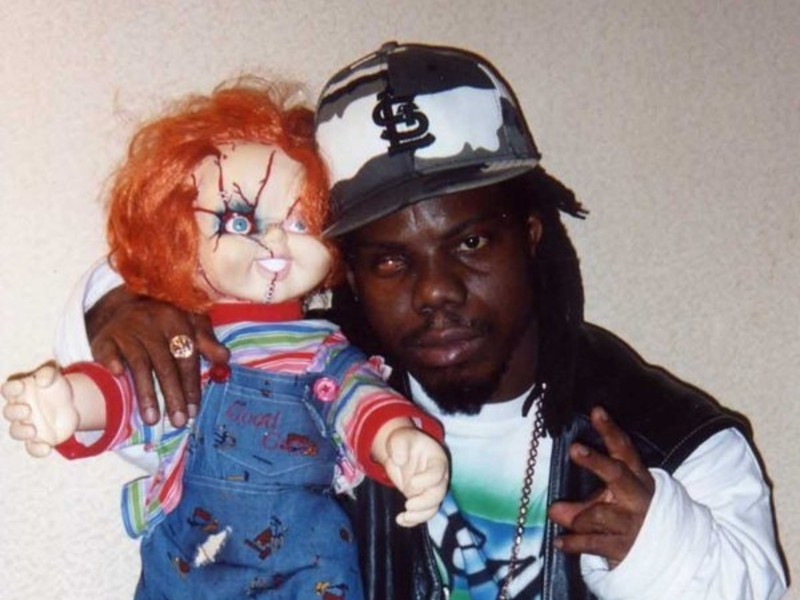 Halloween is Tuesday (October 31), which means children will dress up as Stormtroopers and knock on doors for free candy. It also means college students will freeze their asses off in booty-bearing kitty cat costumes and drink their faces off.

Hip Hop has always gotten in on the fright with its horrorcore subgenre, populated by the likes of Three 6 Mafia and Brotha Lynch Hung. There also have been real-life happenings within the genre that would have even the trillest of OG’s hiding under the covers. From the near-fatal to the paranormal, here are six of Hip Hop’s most shocking stories.

No, not the Method Man and Redman album. On July 13, 1977, New York City faced a city-wide power outage, and the city was already on fire — literally. South Bronx slumlords were paying rent-a-thugs to set abandoned buildings ablaze to collect insurance money, and the Big Apple was shaken to its core by the Son of Sam killings. So when lightning struck multiple power generators and the city went pitch-dark, the tension that was bubbling beneath the surface spilled out onto the streets of New York.

It was chaos. Families retreated to their homes while reckless opportunists broke into stores for whatever they could get their hands on. More than 16,000 stores were looted, more than 1,000 fires were set, and the damage toll exceeded $300 million. But in all of that, the fledgling culture of Hip Hop exploded across the city.

The DJ and sound equipment that was hard to come by was suddenly available, as some DJs stole the equipment, and others purchased the equipment from those who had jacked it. Grandmaster Caz remembers how, almost overnight, the number of DJs multiplied exponentially. Just a few years later, Hip Hop found its way onto mainstream radio. An excellent example of turning tragedy into triumph.

Bushwick Bill’s Vision For The End

One of the most infamous photos and album covers in Hip Hop history is Geto Boys’ We Can’t Be Stopped. The cover features Bushwick Bill being rolled on a gurney in a hospital, flanked by Willie D and Scarface. The horrifying story behind the image involves a night of unbridled partying and an urge to end it all. Bushwick Bill said in a 1991 interview with Billy Jam that he guzzled Everclear at a club, smoked weed and then went back to his house with suicide on his mind. In a foggy stupor, Bill woke up his girlfriend and told her to shoot him. “I wanted to die,” he said. “I was tired of my life.”

She refused, so Bill flew into a rage, shooting at her and aiming and firing at his infant child. He then grabbed a vacuum cleaner and tried to cave in her skull with it, but his drug-addled aim missed her head. He gave her the gun and jumped at her, and when he saw her reach for the trigger, he shoved his right eye in front of it. The barrel of the gun would be the last thing Bill would ever see out of the eye as she fired a bullet through his iris. Bill survived and converted to Christianity, keeping the d’evils at bay, but not before he lost half his vision.

Suge Knight, grayed and imprisoned, is a shell of the man he once was. But there was a time when he was the most terrifying man in Hip Hop. Eazy-E found this out in a near-perilous fashion following his fallout with Dr. Dre, who joined forces with Knight to create Death Row Records. When Dre left, there was still the little matter of his deal with Ruthless Records, run by the weasel Jerry Heller and Eazy.

Playing the roles of both Don Corleone and Luca Brasi, Knight took his goons to meet with Eazy to force him to sign a release for Dre. Knight assured him that either his brains or his signature would be on the paper. After Eazy was stomped out, Dre was free to go like Johnny Fontaine. Eazy indulged Heller in his plan to murder Knight, but Heller stopped him. He told Vlad TV in 2013 that he regretted stopping the killing. His reason?

“I would have done the world a favor.”

Lil Wayne: A Centimeter From Death

That was the thought that went through Dwayne Carter’s head when he was only 12-years-old, as blood leaked from a self-inflicted gunshot wound to his chest. Lil Wayne was alone at home when he found a pistol. He took the clip out but had no idea there was a bullet in the chamber when he was jamming out to music and playing with the deadly weapon. Under the spell of Mary Jane, he accidentally pulled the trigger and shot himself less than an inch from his heart. Wayne collapsed onto the floor and, with every ounce of his might, crawled to the phone. He dialed 911, but when first responders arrived, they could only hear loud music coming from the house. Wayne heard them pounding on the door, but he couldn’t muster up the ability to scream for help.

Suddenly, the pounding stopped, and Wayne thought they were gone. He slid across his living room floor in his own blood and made it to the door, moaning for help. The responders made it inside, and one picked him up, cradling Weezy in his arms like a baby. Wayne slid in and out of consciousness on his way to the hospital, and emergency surgery saved his life. To this day, there are still two bullet fragments lodged about a centimeter from his heart.

Big L’s mother, Gilda Terry, told AllHipHop that he was a ‘B’ student who never got into trouble at school. Apparently, L kept his demons at bay. But at night, when he slipped out of consciousness, they swarmed to his membrane. L was raised on Gospel music and weekly trips to church with his mother, so spirituality was a part of his foundation. But when he forayed into horrorcore, the demonic lyricism must have seeped into his mind. One night, he had a heart-stopping dream that he was the son of the devil. He turned it into one of his most memorable songs, “Devil’s Son.” The cut features eye-popping lines like “A nigga hit me with a can of beer, then he ran in fear/ Later they found him hangin’ from a chandelier.”

Tragically, the evils of life caught up to Big L when he was gunned down in 1999.

Forces Against 2Pac’s “Hit ‘Em Up”

2Pac lived a life that could have been a season of American Horror Story. From being convicted and imprisoned for a crime he didn’t commit, to being shot five times, to being shot again seven times, Pac’s life was truly traumatic. But perhaps the eeriest moment in his career occurred when he was creating “Hit Em Up.”

The vicious diss track directed at The Notorious B.I.G., and Mobb Deep escalated the Death Row-Bad Boy beef to top-floor levels of intensity. Pac and Big were dead within two years of its release. Outlawz rapper E.D.I. Mean said in an interview with Vlad TV that mic shortages plagued the recording of “Hit Em Up.” Perhaps a force beyond our understanding was trying to prevent the disasters to come by stopping the song from being recorded.

“It coulda been a sign,” E.D.I. Mean said. “It could have been, (2Pac) was just vibrating on an energy so high that it started fucking with the electrical equipment. I don’t know.”

We saved this one for last because it is more bone-chilling than any other hair-raising happening on this list. On Sept. 3, 1990, Vanilla Ice released To the Extreme. More than 15 million people worldwide were traumatized by this diamond-selling monstrosity and more were forced to suffer the insane popularity of the lead single, “Ice, Ice Baby.” The album’s success is frightening not just because it happened, but because we all let it happen.

Indifference is the enemy of good.