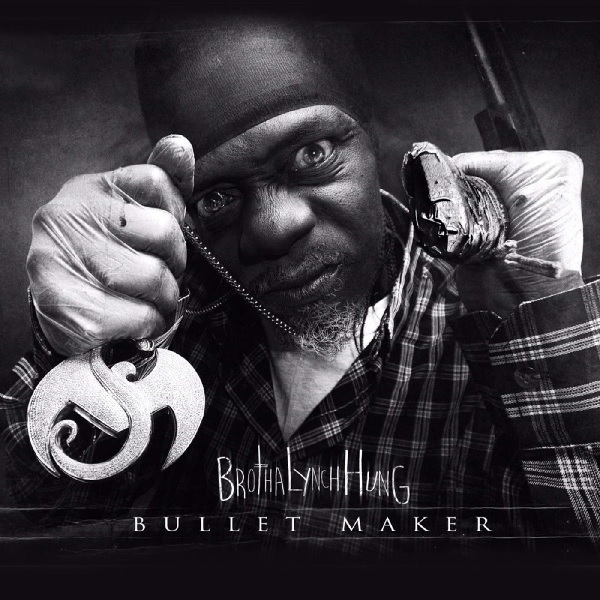 Bay Area and NorCal heads love Brotha Lynch Hung. The Sacramento native has been appeasing fans of regional West Coast G-Funk and the cult-favorite Horrorcore subgenres since 1993. His catalog is extensive, and the rate at which he drops new material speaks to his work ethic; unequivocally, he’s a champion of the indie world.

To kick off 2016, Bullet Maker, a seven-track EP, is Brotha Lynch Hung’s tenth official studio album, his first since 2013’s critical success, Mannibalector. With an intro, outro and five songs sandwiched in between, Bullet Maker is light on material, yet still potent enough to provide an adequately succinct listen from beginning to end.

Twenty-three years in the game have solidified a certain lyrical know-how for Brotha Lynch Hung; the man can spit, no two ways about it. On the title track, he flows over the nightmarish synths: “Hit ‘em with the tech nine / No pun intended / But you niggas better respect mine / Bullets will end it.” His ability to craft around the tempo is apparent, and the lyrical movements of each track are what keep the listener coming back for more. “Ya Brains,” displays the respective abilities of Lynch and oft-collaborator G-Macc going bar-for-bar, while “Dracula,” and “I Almost Got Away With It,” are proper exhibitions in traditional Horrorcore. “Dracula,” in particular, is a lyricist’s ball, dripping with euphemisms and metaphors from guests Bleezo, G-Macc and Dalima. No matter the scenario, Brotha Lynch Hung knows the prescription for each and every beat.

Ironically, it’s those very same beats that hold Bullet Maker back most. Basic piano loops are utilized on each song in a number of ways, and in the cases of “Ya Brains,” and “Sleepless Nites,” the target sound is met. However, that consistency doesn’t carry throughout the entire project. As the four-man lyrical posse-cut, “Dracula,” requires minimal attention from a production standpoint, but its replay value is hindered by a lack of musical creativity. Similarly, the aforementioned title track will appease the West Coast fans for its nostalgic synth inclinations, though the beat-on-a-loop wears out its welcome quickly. Said lack of attention to detail is what most directly affects the concise whole of Bullet Maker.

At this stage of his career, Brotha Lynch Hung doesn’t put out music just for shits and giggles. Bullet Maker establishes a vibe and works well as a cohesive listen, but its status as an EP, short runtime and shoddy production work at odds against its otherwise impressive variety. Tonally and thematically, it would be better suited as a full length LP; as in the upcoming Kevlar. The tenth time wasn’t necessarily the charm but its presence comes with the understanding that tweaks and adjustments will be necessary next go around.