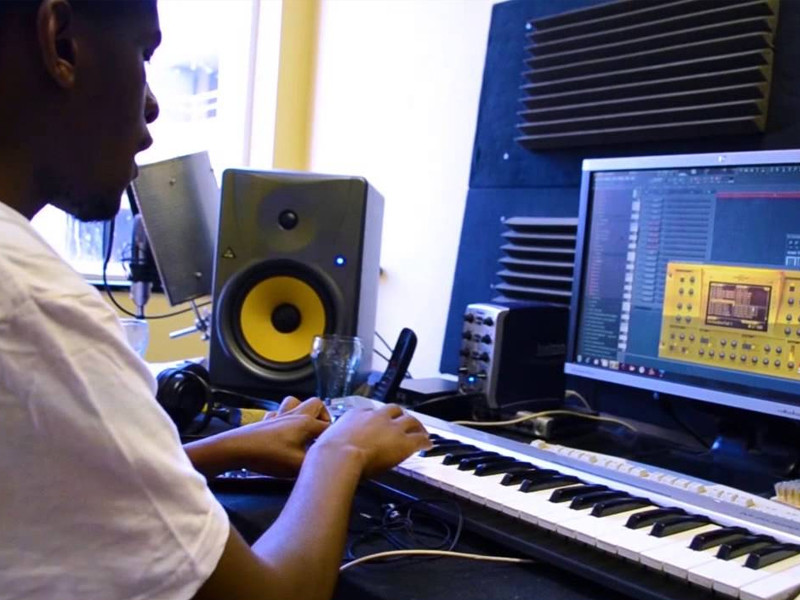 It’s 2017, and much like being an up-and-coming rapper, being a little-known producer is harder than ever. While the digital era has resulted in an unprecedented amount of competition, it also created a tremendous amount of opportunity for those willing to go the extra mile while honing their craft.

“You’re not flawless overnight,” Sarah J tells HipHopDX. Sarah is a veteran manager of producers who has placed records with some of the biggest names in Hip Hop — Meek Mill, French Montana, Wale, Jadakiss, Tory Lanez, Fabolous, Nipsey Hussle, Juicy J, Lecrae, Slaughterhouse, Machine Gun Kelly and many more. “People that can learn from those that give them feedback … that’s attractive.”

For years, Sarah has been sharing great insight with up-and-coming producers. But how does one get on her radar? What makes a great producer?

“Someone that is constantly reinventing their sound … someone not afraid to try new software or samples,” she says when explaining what she looks for in new producers. “Someone who can take criticism well, structure full songs and know what a great mix sounds like. A great producer knows how to grind and has a strong work ethic while being able to adapt to the current times in music.”

“I believe that people are ready for a manager when they have something to manage,” she says bluntly. “I feel like in the meantime, a new producer should just work hard on being independent … studying up all they can on the business side of things and just really trying to get their name out there on their own. When they have placements coming in and real business to manage, that’s when I feel like you need a manager, a lawyer … stuff like that.”

“Hey, mate, did you listen to my beats yet?”

“Check out my SoundCloud link.”

Do any of those sound like pitches to you? Maybe you need a refresher.

“You’ve got come at people in a different kind of way,” Sarah explains. “Sometimes you gotta take people out to lunch; you gotta bring them to the strip club. You gotta do different things that are going to stand out in people’s minds and make them want to do business with you.”

For all producers out there looking for their big break, Sarah shared five fantastic tips with DX to help you put your best foot forward.

Social media is king. As Sarah explains, the biggest element is creating a relationship with your audience that keeps them engaged.

“Every producer should have a YouTube channel,” Sarah says. “It’s a free platform and one of the biggest search engines where artists and labels and everybody look for beats and producers. Also, a SoundCloud page with fresh tracks that you update all the time.”

She also stresses how important it is not to be stagnant.

“Don’t have the same stuff on your page all the time,” Sarah says. “You need to be constantly updating your sounds and your tracks on your page to keep customers coming back. Also, have a SoundClick page. I know a lot of people think that it’s oversaturated for the producer market, but it’s one of the biggest beat sites still, and it has crazy traffic, so I recommend it.”

Lastly, video is everything.

“Get all the footage from all these different things you attend and just start blogging,” she says. “You know what I am saying? We live in a visual world where people want to see what you’re doing.

While the message is clear, Sarah is quick to caution against spamming.

“Beat spam gets on my nerves,” she admits. “I’ll have producers that send me 50 tracks all the way down the page. That shit is annoying, and I know that other managers, other A&Rs and other artists I talk to think that shit is annoying. To the point where they don’t want to do business with that person because it’s very unprofessional.

It doesn’t pay to spend all day and night in the lab.

“Travel to network and get to these produce events, music conferences, open mics, meet with labels and artists managers, book studio session in other cities,” Sarah notes. “Anyway to meet people face to face goes a long way.

“When I was first coming up, I used to travel back and forth to New York and LA all the time, just meeting with A&Rs to the point where I was on panels with them. They were reaching out to me, I didn’t have to chase them. If producers spent more time traveling and doing the same thing, they would see how easy it is to develop that relationship in person, I feel.

“I realize all this stuff takes money, but sometimes you got to make sacrifices, and you have to get to some of these places at least one or two times per year: A3C Festival, SXSW and so on.”

Making yourself stand out is everything.

Come with a new sound

Right up there with beat spam is the monotony of the same old sound over and over.

“I always tell producers to come with a new sound … don’t copy,” Sarah advises. “Also, make your tracks sound as universal as possible … come with full concepts and full reference records. Labels want to hear full songs. It’s easier to play stuff like that too. If you’re going to shop instrumentals around, like I said, just come up with a new sound — something that somebody wants to fuck with that doesn’t sound like your ordinary shit that everybody hears every single day.

Some people sit around and dream of success, while other people get up every morning to make it happen. Which one are you ?

Study all you can about the business

The music business is just that — a business — so it’s important to arm yourself accordingly.

“There’s tons of information online; there are books about the business,” Sarah says. “Learn about what publishing is, how to register your songs, how streaming works … find a good entertainment lawyer and just really do a lot of research is all I can say.”

“In this game, you have to be flexible and be able to work with people,” she explains. “Talk to people without having a huge ego because it keeps the business coming back to you. I’ve seen tons of producers ruin placements and relationships over just acting shitty, having a shitty attitude and thinking they know everything.

“It’s crazy because then I have people who are like, ‘Sarah, don’t even send me any more of his shit. He’s too much of a problem. I don’t even want to deal with him.’ I’m like, ‘Okay, cool.’ You know what I mean? It’s essential to just to treat people with respect in this business and just keep your name good out there.”