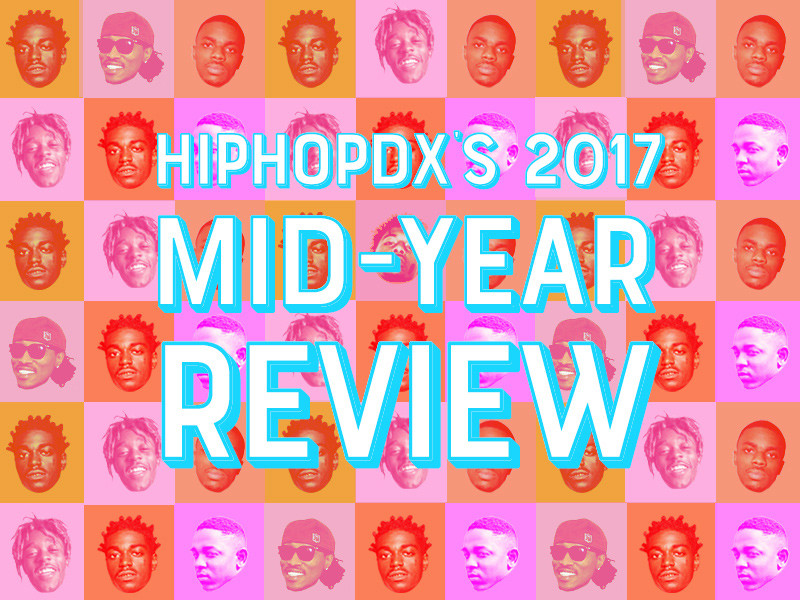 Now that we’ve passed the mid-year mark, it’s time to take stock on the tracks that moved the masses.

To get this list, DX’s editorial team individually ranked their personal top songs of 2017 and then we summed up the scores for cumulative totals. (Spoiler alert: we REALLY liked DAMN.)

One caveat: we finalized this list before 4:44 came out, so stay tuned to our year-end review for what will likely be the Kendrick vs. JAY showdown.

Check out our favorite tracks of the year so far, and let us know what yours were in the comments below.

From Zacari’s introduction — which also effectively introduced the world to Zacari — “LOVE.” hits with gorgeous melodies. This slow jam off DAMN. shows Kendrick’s vulnerability as well as his versatility as an artist. Bump it on a night drive with your significant other before you’re sick of it once it becomes another hit single.

“Yo Pierre, you wanna come out here?” went from a funny reference for Jamie Foxx Show fans to the beginning of any turnup in 2017. Playboi Carti’s “Magnolia” became one of the hottest songs of the first half of the year thanks to a catchy hook and Pi’erre Bourne’s infectious beat. Hip Hop fans look ready to continue Milly Rocking throughout the summer because the “Magnolia” momentum hasn’t slowed down yet.

Whenever momma offers up friendly advice, you should probably take heed. Especially when it involves staying out of trouble in the catchiest way possible. The only thing better than a hit single is a hit follow-up and Migos paved incredible ground for their future Billboard chart-topping album, CULTURE, with this gem. Also, the track was the ultimate redemption for Takeoff (AKA Mr. DoesitlooklikeIwasleftoffbadandboujee).

The lead single off Kodak Black’s Painting Pictures debut album depicts the challenges of trading a life in and out of the prison system for new-found fame. Kodak raps about the necessity to “keep a tunnel vision” to stay out of further legal trouble and to keep bringing money in. The head-nodding rhythms and Kodak’s passion-to-pain cadence make this banger a slam dunk.

Exploring emotional turmoil and suffering over the course of three decades, King Kendrick (along with Alchemist) walked us through stern maternal discipline, the pressures of adolescence in Compton and the perils of financial irresponsibility, despite his present self-confidence. Tying the album’s songs into the overall concept at the end, Kendrick proves he’s one of the best conceptual songwriters of our time.

“Mask Off” was the runaway hit from Future’s back-to-back self-titled releases, initially charting even higher than “Draco,” the album’s official single. Metro Boomin’s flute loop inspired countless memes and landed Future the highest-charting solo single of his career, hopefully inspiring more kids to pick up the woodwind instrument than the drugs Mr. Hendrix lists in the chorus.

Don’t worry. You’re not alone in your love for this song. (You’re also not alone in your hate for it, but if that’s how you feel you’re reading the wrong list). Lil Uzi nails all the right notes with this TM88-produced pop-punk/rap/emo hit, and it earned him the highest charting solo song of his career.

The switch-up in the middle of Kendrick Lamar’s “DNA.” is nothing short of brilliant. For the first part of the track, he delivers bars at a steady pace, but as soon as that two-minute mark hits, the unrelenting barrage of lyrical bullets comes at a dizzying pace. The beat is another Mike WiLL Made-It masterpiece and manages to keep up with Kendrick’s ferocity and subsequent comedown. The he’s got “hustle though, ambition, flow” inside his DNA is an understatement.

Kendrick Lamar closed out DAMN. with a bang. With the help of three 9th Wonder beats, Kung Fu Kenny told a true-life tale compelling enough to be a Netflix documentary. “DUCKWORTH.” let listeners know how the fate of rap could’ve changed with a few different actions and why his ties to Anthony “Top Dawg” Tiffith run deeper than most fans knew.

With Mike WiLL Made-It on the beat, Kendrick Lamar’s “HUMBLE.” came through like a hurricane and obliterated any other song in its path with explosive trap stylings, 808 bass and aggressive piano notes. As the lead single for DAMN. it showed the rap world again what makes the Compton MC so untouchable. With lines like, “Ay, I remember syrup sandwiches and crime allowances/ Finesse a nigga with some counterfeits but now I’m countin’ this,” and its catchy hook, “HUMBLE.” not only serves as a staunch reminder to keep that ego in check, but also doesn’t fail to deliver on lyrical acrobatics either.