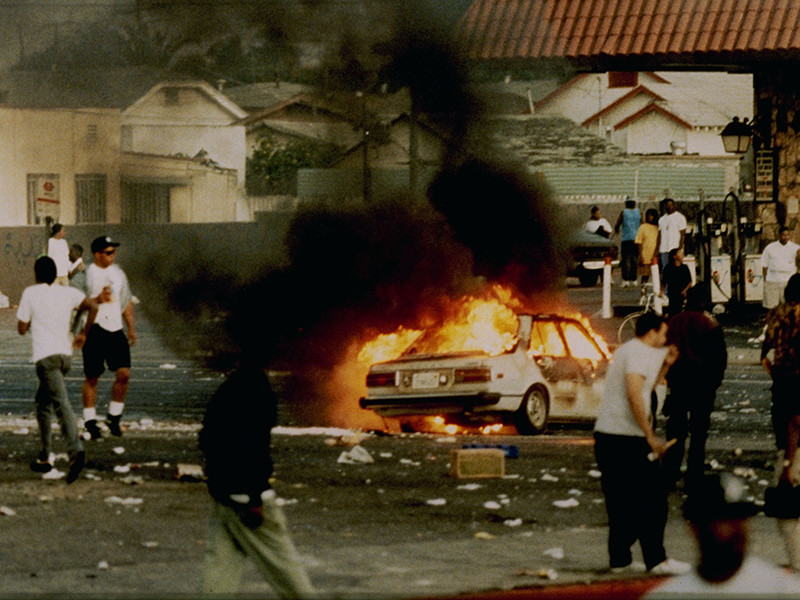 The L.A. Riots At 25 & Its Burning Effect On The Hip Hop Generation

When the four police officers who had beaten Rodney King on camera in Los Angeles were acquitted by a jury that had no black people on it, it was, to some, not that surprising.

But when the city went up in flames on April 29, 1992, it was a shock. It was like seeing a powder keg explode. It was 27 years after the Watts Riots, which began similarly when a black motorist and a police officer got into a heated argument that went awry. It resulted in the city’s blackest section of Los Angeles revolting against the racial injustice it had weathered for too long.

Here is a 25-year reflection of the L.A. Riots and how gangsta rap became the best-selling subgenre of Hip Hop in the ’90s, told from the perspectives of HipHopDX writers who lived it.

Who knew as I slept through the night on my fourth birthday after an amazingly forgettable party that a random black man, allegedly high on PCP, would get brutalized on camera by the same people hired to protect and serve?

I for sure didn’t.

As a young African-American Los Angeleno growing up in that era, my single mother always kept me inside and out of those streets. That didn’t stop me from being a badass kid. I got suspended from kindergarten for a week after throwing my notebook at the teacher. As a student at Garr Learning Center off Gage and Vermont, I lived a five-minute walk away. Obviously, that ass whooping on the way back home was next level.

Thankfully, it didn’t feel much like a suspension considering the next day, all hell broke loose. It started around the corner, off Florence and Normandy. Then the problem was that my mother’s old Chrysler 5th Ave was being repaired at a Leimert Park mechanic.

The following day, that ride to Leimert in my older brother’s Jetta looked like something out of Mad Max. I remember N.W.A, Ice Cube and Ice-T blasting out of speakers as fire and destruction surrounded us.

School was canceled for about a week and I spent time with my family watching footage of the carnage. Everything just didn’t feel real until I got older and better understood the socio-economic context.

At that time, I was just a scared five-year-old kid wondering what in the hell was going on.

I was sheltered from the chaos of the L.A. riots in the backwoods of Connecticut, but I formed an opinion early and felt some rage as one of the few black students that my white sixth-grade counterparts had no cultural connections to at the time.

I had listened to gangsta rap albums that my father occasionally played in his car rides, or sometimes would hear them at a friend’s house. Cult classic films like Colors, Stand and Deliver, and Boyz n the Hood piqued my curiosity to learn more about the City of Angels and the people who lived alongside its police force.

Chuck D of Public Enemy once dubbed rap music as “the black CNN,” and my source of information to learn about the urban Los Angeles community was to watch gangsta rap videos aired on Yo! MTV Raps, interviews with those artists in The Source magazine, and the daily evening national news that covered the rampant gang violence in the city.

The erudite and didactic poetry of artists like N.W.A, Compton’s Most Wanted, Ice-T, and Cypress Hill was not only entertainment, but also provided a sense of trustworthy “street reporters” who were broadcasting the underbelly of crime, gang warfare and police brutality. Unlike Roy Ayers’s classic tune, their portrayal juxtaposed the image of L.A.’s swanky lifestyle and perennially low precipitation weather reports on how everybody doesn’t love and experience the glory of the sunshine there.

When a candidly shot video of black motorist Rodney King pulled from his car and severely beaten down by four white L.A. police officers for 15 straight minutes has surfaced, sadly, it wasn’t as shocking as it was galvanizing to upend the stratification of blacks as second-class citizens in a country their ancestors helped build without choice 400 years prior. Regardless of the fact he had allegedly evaded police on the freeway as he drove drunk, I lived approximately 3,000 miles away from where it happened, and was already aware of what some blacks had faced at the hands of “L.A.’s finest.”

The most incendiary revenge fantasy on cops in music history was Body Count’s “Cop Killer.” It wasn’t just an attack on police, but rather a vindication that a coup d’etat was on deck. The $6 billion damage to city property and symbolism of California palm trees on fire looked as apocalyptic as the movie The Terminator.

Fifty riot-related deaths, an estimated 11.0000 arrests, and 2000 injuries gave rappers enough rhyme or reason to catapult rap music to be the most powerful music on the planet. It was a reflection of the dark reality. Several white and black politicians were more concerned about gangsta rap than the police’s barbaric treatment of people they were supposed to protect. They were the bullies of the block.

Police Commissioner Darryl Gates allowed black, Mexican, and Koreatown neighborhoods in L.A. to get destroyed by their own residents for three consecutive hours after the “not guilty” verdict cleared King’s assailants.

The upheaval from the L.A. Riots caused rap music to become a powerful voice for Generation X in the ’90s and subsequent millennials. The underground music dating back to the early ’70s had finally broken through to the mainstream, making artists who exuded urbanized political unrest as a valuable commodity for suburbanites.

Ice Cube became a household name with his third album, The Predator, with songs like “Wicked” and “We Had To Tear This Motherfucker Up” to basically tell the public: “I told you so.” Also, the monumental success of The Chronic in late 1992 (see classic album cut, “The Day The Niggaz Took Over”) was propelled by the attention that the L.A. riots garnered from the world.

The riots even created a sense of solidarity between warring Bloods and Crips gang members. According to NBC News in 1990, there were 452 gang-related murders, a number that was sadly normalized after decades of killings. Ice-T celebrated the short-lived truce that came forth on his song “Gotta Lotta Love” from his 1993 album Home Invasion.

As Russell Simmons once famously said, a rapper’s job is to tell the truth. Twenty-five years later, we see the popularity of artists like Kendrick Lamar, Joey Bada$$, ScHoolboy Q, Nipsey Hussle, and YG urging listeners to “stay woke” in the wake of the travesty we’ve witnessed on the political landscape and bloodshed of innocent people of color on the streets at the hands of police across the nation.