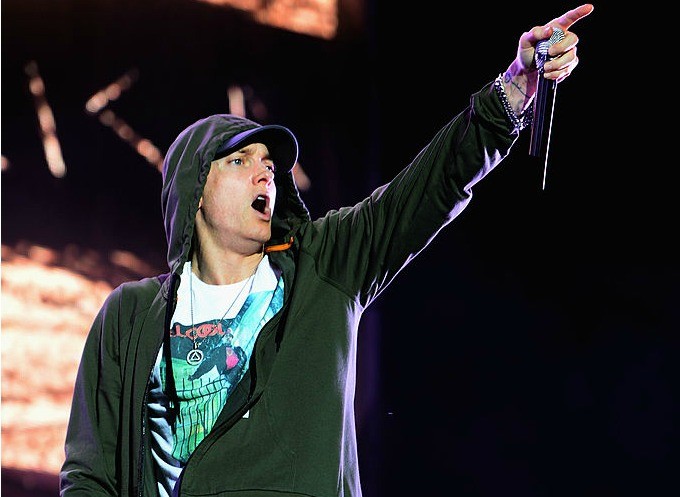 Donald Trump, Molly Qerim, Vivica Fox: Eminem Is Back To What He Knows

Three years have almost passed since Eminem dropped his last full-length album, Marshall Mathers LP 2. Besides hopping on numerous remixes, giving guest verses and giving us “Phenomenal” last year, rap fans have been dying for any information related to whatever Shady had cooking. Then he dropped a tweet. And a new song.

To accompany the official album announcement but dropped “Campaign Speech,” 7:47 minutes of political American awareness as the nation tuned into the last United States Presidential debate. Minimalistic production that sonically transforms allows Sir Bruce Mathers to do exactly what’s made him one of the greatest MCs the culture has ever produced. In response to today’s pleasant surprise, HipHopDX Editor-In-Chief Trent Clark, Senior Features Writer Ural Garrett and DX Contributor Dana Scott give their opinions on the Rap God’s return to form.

Trent Clark: Name an Eminem album rollout that wasn’t spearheaded by a goofy ass single. I’ll go ahead and help you; it was Recovery (got my Eminem R-albums mixed up), with that now unbearable pick-me-up battle cry, “Not Afraid.” So, enduring the bulk of “Campaign Speech’s” nonsensical anecdotes didn’t wow or move me in the slightest. I mean, the last “freestyle” I remember of his, he threw Caitlyn Jenner’s name in the pot so any type of limits you may have thought the second twilight of his career possessed were completely thrown out of the window.

I’m interested to see how “Campaign Speech” fits in the context of the upcoming album and if it will be remixed with a beat or relegated to bonus track purgatory. As impressive as some of the runs were (“When will I quit? Never been realer/The instiller of fear, not even a scintilla of doubt/Whose pens iller than Prince in a chinchilla/Or Ben Stiller in a suspense thriller/Revenge killer of bin syllable binge) I can’t say I have a whole lot of use for bumping this record without a proper melody. Remember when 50 Cent rapped “I used to listen to Lauryn Hill, and tap my feet/Then the bitch put out a CD and didn’t have no beats?” The same rule applies here.

Also, shame on anyone who didn’t know Molly Qerim been fire (everybody should rejoice there was no grab’em by the pussy line too!)

Ural Garrett: Eminem is a GOAT without a doubt. There aren’t too many who can reach into the carnal nature of true emceeing, yet makes music that’s embraced by mainstream pop taste. “Campaign Speech” is purely about rhyming to the tenth degree. In an era where everyone has to have a big single, Em decides to do exactly what he does best — rap his ass off while reminding everyone why he can still be the most feared lyricist in Hip Hop.

“Why am I such a dick,” Shady jokes near the end after he flips between bars referencing Trayvon Martin, Kaepernick, Trump, Vivica vs. 50 Cent and even those still participating in the losing battle in challenging his misogynistic lyrics. Only Em could put together “Yall got it twisted / all because I offered her a doggie biscuit / you call me misogynistic / bitch get to messaging this dick / like spas in this bitch/ slob on it with gobs of lipstick” with such a surgical precision wordplay wise that the crassness becomes secondary.

“Campaign Speech” begs for every word to be slowly dissected which requires a taste for true lyricism. Mumble rap fans need not apply here. The atmospheric instrumental that transitions between dark synths and creepy cinematic score really accentuates Em here. This is probably the best beats-n-rhymes moment this year and should keep fans satisfied until he really gets into releasing material from his album.

Dana Scott: When prominent aging artists come back with new music, I look for two things: how they shape up against the current market of talent; and convincing their return to the game is. Hip Hop ages in dog years, so it’s suitable for Em to say “You got it twisted/All ’cause I offered this bitch a doggie biscuit” in his track.

But to rap for almost straight minutes with no chorus and a minimalist beat seems more like a spoken word from a rapping robot to make purists swoon over the endless bars. Later in the track, as we hear the scarce drum programming come in that sounds like he’s selling some trap sensibilities that are in vogue. But he immediately shuts that door to revert back to sounding like he’s figuratively taking a knife to the table and stabbing in between his fingers spread wide with that type of cadence. That tends to be monotonous.

As for the Trump commentary of Em not wanting him to win the election for his stupidity, it cancels out with his obtuse barbs objectifying women. And I’m not trying to sound like a bra-burning feminist but lines like “Robin Thicke with a throbbin’ dick on some suave and slick shit/But I shout derogatives at bitches like fuckin’ missile launches,” and “Use intercourse to settle scores with women who have been vendettas towards men” seems somewhat aligned with Trump’s unsavory rhetoric and approach to women. Which is ironic, since the record virtually endorses Hillary.

Em is a formidable songwriter who can take the listener on a joyride with his emotions, coupled with his cynicism to laugh at, and enjoy his organized confusion like he said in “Rap God” when he’s “on his Pharoahe Monch vibe.” He tends to offer fans warm-up for his new projects. “Campaign Speech” is a mere tease for what’s next up his sleeve.