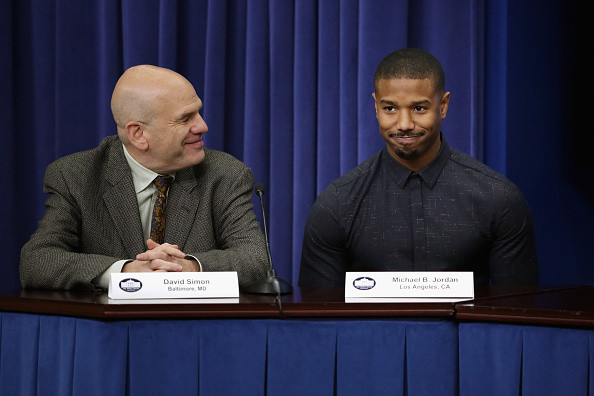 Renown journalist and writer/producer David Simon has carved a legacy by creating HBO’s famed series The Wire, one of the best television shows not to win an Emmy and one of the most effectual parallels of street, criminal, police and urban cultures ever to be captured on film.

That being said, Simon is still a 56-year-old white man who figured with his close proximity to black people in Baltimore, one of the nation’s largest populations for African-Americans, he could use the n-word in a very tongue-in-cheek manner.

When Think Progress editor Judd Legum pointed out the ridiculous recruiting of FOX’s Sean Hannity by Republican presidential candidate Donald Trump to host a town hall outreach to potential black voters, a lot of awareness and eyebrows were raised.

1. If you want to know how seriously Trump is taking black outreach, he's holding a townhall on Wed on black issues hosted by Sean Hannnity

Simon chimed in with a retweet that he captioned: “Hannity my nigga! If they couldn’t get Ta-Nehisi or Deray to host, then who but you on the pulse of black America?”

It’s fairly accurate to say the nature of the joke wasn’t lost on anyone, as Hannity probably identifies with black people just as well as unseasoned chicken. Yet a popular opinion aligns with white people avoiding the controversial term altogether and Simon immediately found himself under fire, even when his opposers didn’t exactly call him out on it.

In fact, there were plenty of metaphorical memes using, what else, but The Wire, among other pop culture favorites?

When you finally see that David Simon tweet. pic.twitter.com/PMqGn556cH

When you see David Simon's tweets from last night pic.twitter.com/sso63PihIS

@eveewing David Simon be like why do you get to say it then? pic.twitter.com/WO1BafVqJY

the wire was good but not this goodhttps://t.co/SNKM988i9B

Naturally, Black Twitter pointed out the discrepancy as well.

Y'all done gassed David Simon up. Got him thinking he's too #woke

David Simon out here thinking no one black understands his “usage” and irony. If that ain’t condescending AF…

David Simon has white folks, Black folks, and every The Wire gif ever created in his Mentions telling him to fall back & he refuses. Welp.

david simon created the wire. david simon also tried to defend his use of the n-word just like this dude: https://t.co/0s9CAKgKkp

Simon didn’t exactly apologize but he did tweet out that he “owns” the tweet and engaged in healthy discussion with one of his followers writing, “Would I do it again? No, because the real message got submerged. But not cause I think the meaning of it imprecise or wrong.”

Things that make you go “hmmm.”