8 Highlights From Minister Louis Farrakhan's Talk With The Breakfast Club 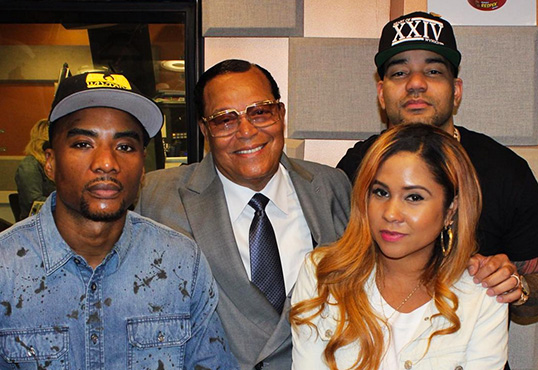 The Honorable Minister Louis Farrakhan dropped by The Breakfast Club yesterday (May 24) for a lengthy interview that covered his thoughts on the upcoming presidential election, self-sufficiency and solidarity in black communities, and the importance of squashing rap beefs.

Here are some of the standout moments.

The leader of the Nation of Islam spoke highly of Kendrick Lamar, praising his consciousness.

“I’ve never met brother but I see him as a very great thinker. He’s very conscious. His lyrics are tremendous, and the beat. This is the genius of us. We’ve got the whole world in our hands. You go to China and … they know all the rap. All you gotta do is just twist it a little. Satan grabbed rap, that came out of the Bronx. That was consciousness. Public Enemy, KRS-One, Big Daddy Kane, they were teaching.”

He went on to describe the rise in gangster rap as a plot by white men to keep black men down. Behind the scenes, he explained, there was a concerted effort to promote rap about drugs and violence to keep black communities down.

Birdman’s showdown on The Breakfast Club last month made huge news, but Farrakhan saw it as counterproductive.

“He’s a great giant. I don’t want to see him beefing with you. If we settle it, we bring peace,” he said. “I’m hoping that my brother will squash all these beefs so we can have some peace and get to the real enemy, which is not each other.”

On Solidarity In The Black Community

This was a major topic of conversation in the interview, with Farrakhan speaking at length about the need for self-sufficiency and solidarity in black communities, comparing them to other minority communities who he considers as often being more organized.

He also speaks on the need for community policing, and for black-owned businesses to bring positive commerce and healthy food into their own neighborhoods, and then in turn to keep the money they’ve earned inside the community.

Money from taxes should come back into communities to help pay for education, he also suggested.

“Who cares if we don’t care?” he asked. “We do care and we’ve got to care more. We’ve got the power, all we need is leadership and organization and a station like you and others that are in media — let’s come together and literally we can wake our people up overnight.”

Previously, Farrahkhan had praised republican nomination frontrunner Donald Trump, for what he saw as a refusal to take donations from the Jewish community. Here, he further detailed his position.

“I saw some good in Trump in this sense: when a man refuses to take money from those who give money to politicians — and you don’t pay the piper and sit back and let somebody else call the tune. So I thought that Mr. Trump, by going right to members of the Jewish community and telling them ‘I don’t need your money and I don’t want your money,’ that meant to me that he would be free enough to work for the good of America, and I applauded him for that but of course things change.

“He’s looking for some money now. He’s looking for a billion dollars and he doesn’t want to put that up. So he’s looking to some of those who traditionally support politicians to have their way,” he continued.

“Certain things that [Trump] was saying, that he wanted to go into Iraq and just take the oil. He sounded like the Corleone family. ‘Let’s get it all while we’ve got the muscle.’ I said this man is peeling back the onion of white civility and every level of that onion that he peels back more and more of the nakedness of rancor and hate and bitterness is coming up out of the followers.

On The Presidential Election

Farrakhan spoke in general about the election as well, calling it “one of the most interesting of all of the political presidential runs that I’ve had the blessing of seeing in my 83 years on this planet,” but didn’t seem encouraged by the prospects at hand.

He said he felt that Bernie Sanders was “the most honest of all of them,” but questioned whether he’d be capable of bringing positive change to America, explaining that “the system is rotten to the core.”

He didn’t seem to have faith in Hillary Clinton, Donald Trump, or the system itself. “You’re not just voting for a president, you’re voting for a person that can take America totally down,” he warned, and also said, “You either have to vote for Satan or The Devil and you catch hell with either one.”

On George Zimmerman Selling The Gun That Killed Trayvon Martin

Farrakhan was disgusted by George Zimmerman’s sale of the gun that killed Trayvon Martin, comparing it to selling a piece of the cross that Jesus was crucified on.

“That shows you the hate that is in the world, that you could offer a gun that killed a black man and offer it for $250,000,” he said. “What about the gun that killed the nine in South Carolina? How much will we pay for that? See? People are insulting us every day.”

In Part 2 of the video, the leader of the Nation of Islam praised women, saying “no man is a man without a woman” but stressed the importance of them “respecting themselves.” He encouraged them to treasure their beauty, explaining, “you are not just a woman, you are a sacred vessel.”

On The Feminization Of Men

Drawing from a point that Charlamagne made about the feminization of the black male and new trends in fashion, Farrakhan suggested that chemicals are causing changes in people’s bodies and minds. He gives an example of a drug that has “suicidal thoughts” as possible side-effects, questioning how a chemical could make someone sane go insane.

“What about the rise of homosexuality and lesbianism? Is that a natural phenomenon? Are we born that way or is it a chemical reaction that makes us susceptible to ideas like that?” he asked. “I think if we check what we eat and check the pills that we use we’ll find out that some of us are absolutely being chemicalized as we’re being feminized.”