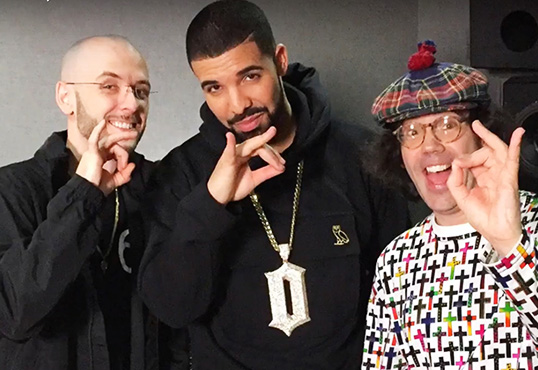 He is one of the most famous names in Canadian Hip Hop, regularly spotted alongside the biggest stars in the business. Musicians jump at the chance to work with him. His approach to his craft is unique and universally respected.

We’re talking, of course, about Nardwuar The Human Serviette.

The 47-year-old Vancouver interviewer spoke again with Canadian megastar Drake and his longtime friend and producer Noah “40” Shebib at their studio in Toronto.

As is typical of Nardwuar’s videos, the conversation stems from the series of gifts he hands out over the course of the interview. The level of personalization that Nardwuar puts into the presents ranges somewhere between psychic and stalker. But each gift, whether it be a song, or a photo, or something more extravagant, brings with it a flash of memories that acts as a window into the artist’s past experiences and inspirations.

Here are some of the take-homes from the extended interview.

Drake Was Really High During His Last Interview With Nardwuar

Drake kept his sunglasses on for most of the 2010 interview. Now we know why. “I was tripped out because you’re really good at your job,” Drake confesses.

Drake explains that he and Golden State Warriors star and newly-crowned MVP Steph Curry are like family through one of his long-time friends and Steph’s wife Ayesha.

Drake doesn’t explicitly say that he beat Curry at ping pong, but he does say the two played and that he “won’t discuss the result” before giving the camera the knowing glance of someone who has beaten Steph Curry at ping pong.

40 Shares His Softer Side

It’s not really a surprise that musicians would love music, but the interview delivers real insight into the dancehall, soul and Hip Hop roots that inspired Drake and 40’s sound.

While Drake reminisces over albums and photos (and one bobble-head figurine) of rappers like Bun B, DJ Screw, Vybz Kartel, 8Ball & MJG, Three 6 Mafia and Mac Dre, 40 praises Kool G Rap, AZ and OG, and says that Common’s Resurrection was a big influence on him, even if his friends made fun of him and called him “a bitch” for listening to the softer side of Hip Hop.

They Both Come From Artistic Families

Drake’s uncle is Larry Graham, a funk and soul musician who played with Sly and the Family Stone before going on to release several solo albums. Kanye West sampled one of his tracks for “No More Parties In L.A.”

Drake’s strip club exploits have been well documented, and here he admits to spending “fifty-something thousand or something like that” on dancers, but stipulates that a lot of the money was given to him by the club itself specifically to hand out to the ladies.

Kicking It With Yo Gotti At 15

Drake recalls the times he spent in Memphis with his family, including when he met rapper Yo Gotti through his cousin’s boyfriend, who was managing the rapper. He went along to the studio and the club in what he says was his first time seeing what Hip Hop success looked like in person.

“They looked like the richest guys in the world to me,” he says. “I’d never seen so many cars, so much jewelry, so much everything. They had the city just locked down … Yo Gotti showed me a lot about what’s possible in your own city.

Nardwuar also orchestrates a personal video message to Drake from Timmy Thomas, the soul singer whose 1972 song “Why Can’t We Live Together” provided the basis for “Hotline Bling.” Thomas sends a message of appreciation to Drake, pointing out that his own song was #1 in Canada in 1973 and that Drake took it to #1 in Canada again in 2016.

Drake is visibly thrilled by the message, saying, “Timmy, you’re one of my favorite artists … I love you man. I appreciate that message. That means a lot.”

Though they weren’t fighting for space in the room at the same time, the two Canadian rap icons alternated the use of the same dressing room while they took turns filming “Degrassi” and “Instant Star.”

“On his weeks they would swap my name off the door and put up Maestro Fresh Wes … I always had to make sure I took my stuff out of there especially if I had any raps written down on paper,” Drake jokes, before stating the importance of Maestro as the first Toronto rapper to make it big. “Another guy from our city that broke down a wall and had a song that went farther than anybody at the time … He wasn’t scared to claim where we were from.”

The actress from the 70s was the first woman he fell in love with, he says, adding that she’s still the model for the type of woman he’s attracted to today. “I love Pam Grier. I still lust after Pam Grier … She was one of my first muses.”

Drake’s always been clear about his love for battle rap, and when King Of The Dot’s OVO-sponsored “Blackout 5” event went down in Toronto the same weekend as the Grammys in 2015, Drake showed where his priorities were that night. “There were important battles going on that day … It was better than the Grammys to be honest that night, so I was happy about it.”

Even though he’s been doing interviews promoting the new album, Drake says his interactions with the media aren’t usually a pleasant experience, lamenting that journalists are tasked with coming up with sensational headlines.

Well, except Nardwuar, that is. Drake even put in a good word with Lil Wayne so the fellow Canadian could nab an interview.

“You’re one of the most legendary interviewers of all time,” Drake beams.