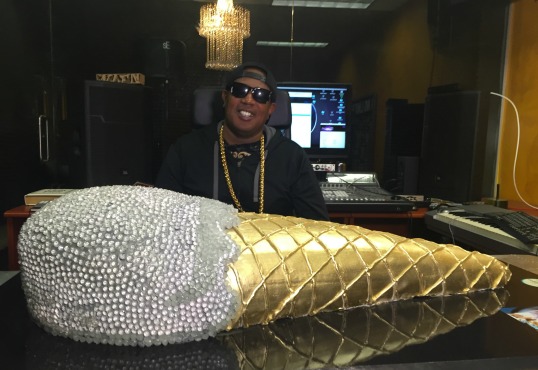 No Limit's Most Luxurious Album Covers

No Limit always wanted to sell hood luxury with every release. Besides making sure the music itself was up to snuff, the cover art had to reflect the aesthetic as well. Makes sense for them to make the good folks at the Houston-based Pen & Pixel Graphics their go-to designers for a large portion of anything released through The Gold Tank. In celebration of Master P’s birthday today, DX counts down the flashiest No Limit album covers the label presented to the world.

Compared to his more street centered Life or Death, life at No Limit and the label’s success clearly gave C-Murder higher aspirations. For his follow-up Bossalinie, he traded the white tee, jeans and sneaker combo for a tailored suit fit for a don and a limousine filled with candy-colored jewels.

Bay Area rapper Lil Italy enjoyed ties to E-40 before linking up with the Gold Tank for On Top of da World. The white Bentley, mounds of cash, European castle and large iced-out chalice holding the earth couldn’t have been more symbolic. Too bad the album tanked and he was discarded from No Limit soon afterwards.

Some could call Only God Can Judge Me Master P’s Kingdom Come to MP Da Last Don’s Black Album. Probably one of the cleaner covers in the No Limit catalogue, his eighth album was just a blinged-out cross.

Naming the group after their New Orleans area code, the 504 Boyz’s debut not only featured their hit single “Wobble Wobble,” but hood booty-call classic “I Can Tell.” The fairly simple cover featured the group’s name in platinum delight with diamond accents with a shimmering gold title over black silk.

Being No Limit’s First Lady meant that Mia X had to be treated like the boss. For her second release through The Tank Unlady Like, the luxurious office space featured Ms. Young’s legs propped up on a desk counting her millions.

For Master P’s first real comeback under the rebranded No Limit Forever, the album cover felt dipped in gold with the iconic tank emblem enclosed by an homage to Versace’s popular pattern. And yes, more diamonds. (Gotta have the diamonds.)

On the previous effort, 1997’s Tru 2 Da Game, the Miller brothers were hoodied and masked up, properly dressed to pull akickdoe. A couple of years and several million bucks later, they were decked out in baggy custom Italian suits and gold-plated Cartier frames. Gawdy!

Who knew No Limit could find monetary gain from death? Then again, funerals can become expensive undertakings within themselves. For Mr. Serv-On’s debut Life Insurance, a mother’s tears can’t stop the hustle.

Mystikal must have been feeling himself a lot following the success of Unpredictable. Aside from rocking that ivory tusk suit while holding on to his various chains, New Orlean’s unhinged rap prince insured his car game was envied thanks to appearances from both a Ferrari and Mercedes.

The iced-out title for Mr. Serv-On’s sophomore release through No Limit only served as a distraction for all the fine, photoshopped ladies attending his affluent pool party. Like several other covers from the label, it further proved No Limit artists really love their all-white suits.

Did Silkk feel wealthy enough to deserve his own credit card by the time Charge It 2 Da Game dropped over a decade ago? Who knows? But, one could tell his imagination must have been running wild. Ain’t no (credit) limit.

Snoop’s first release with No Limit following his historic run at Death Row Records was a smooth transition. Nothing makes a better example of that then the cover for Da Game Is to Be Sold, Not to Be Told. Even the canine on the cover had an iced-out muzzle.

Then supposedly his last album before coming back with Only God Can Judge Me, MP Da Last Don was a two-disc epic and the biggest selling album of Master P’s career. Having a black suite and diamonds from his head to feet made him the cleanest boss of the year. Fans old enough to remember the CD days will undoubtedly remember the hologram effect that showed P’s jewelry bling as his flexed with his cross.