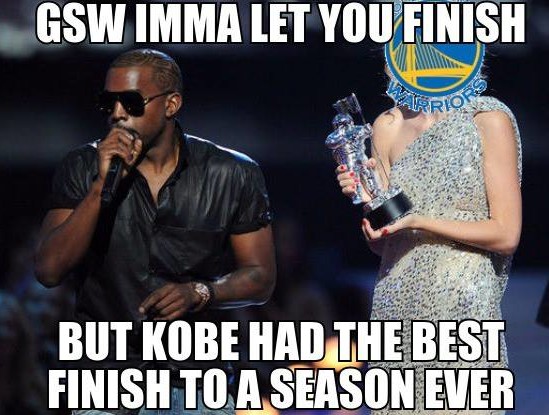 This week, Kobe Bryant’s last game creates some of the best memes this year.

Following the Nick Young and Iggy Azalea problem from weeks back, one would think D’Angelo Russell would stay away from recording his teammates.

From the amounts of tweets this week, emcees past and present will all miss number 24.

Who Had The Best Season This Year?

Many will remember Kobe Bryant’s last game as one of the greatest ever despite the Golden State Warriors being the best team this year.

Meanwhile, the Toronto Raptors lost to the Indiana Pacers Saturday morning. Sports fans had to make fun of the team’s Global Ambassador Drizzy.

There are several memes making waves around the internet fusing vegan ideology with various moments in Hip Hop. A little extreme, but humourous.

And yes, the social media generation managed to link popular 3D fighter Tekken with one of this year’s biggest singles.

Though Post Malone described the moment as roughhousing with a friend, many thought there was beef between the “White Iverson” singer and Justin Bieber after a video surfaced of the two shuffling.

So You Can Freestyle?

Rap purest have been insuring this floats around social media lately.

Waka Flocka In A Galaxy Far, Far Away

Found on Waka Flocka’s Facebook page, someone fused the Atlanta Rapper with the cover of the old N64 Star Wars game.