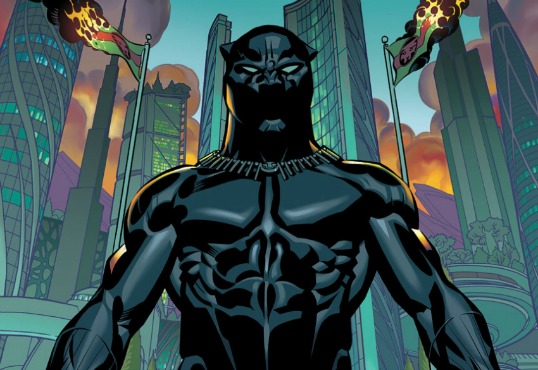 Black Panther is the hero America needs right now, and in the first issue of a run of comic books with Marvel, Ta-Nehisi Coates and Brian Stelfreeze show readers why. T’Challa, the Black Panther and king of the fictional African kingdom Wakanda, will be seen later this year as a character in Captain America: Civil War (played by Chadwick Boseman). But first, the iconic character— the first mainstream black comic book superhero, who initially appeared in 1966–is the star of a comic book series helmed by Coates, whose memoir Between the World And Me won the National Book Award and other honors, and Stelfreeze, who has been illustrating Batman and other comic book characters since the late 1980s.

Between the World and Me is presented as a letter to Coates’ son, explaining the dynamics of racial violence in America. In Black Panther #1, T’Challa says that he loves the people of Wakanda (a fictional African kingdom he rules) “as the father loves the child,” but they’re not as receptive as his son presumably is. Wakanda is the most technologically-advanced country on the planet, and it has been left exposed: a “biblical flood” killed thousands of its inhabitants, Doctor Doom masterminded a robbery of much of its valuable mineral vibranium, and the villain Thanos invaded the kingdom. And as a result, on the first few pages of Issue #1, residents of Wakanda violently turned against each other after being manipulated by a villain who has what appears to be mind control powers. In short, Coates, in what comics scholar John Jennings described as “afro-pessimism” in another story, shows that even the almighty Wakanda has fallen victim of the inescapable wrath of white supremacy.

With Wakanda in shambles, various parties are attempting to piece together the remains in their own ways. T’Challa, with his Black Panther superpowers, technology and army, plans to hunt and kill their enemies, starting with the villain who used mind control. Ayo, a member of T’Challa’s Dora Milaje team of royal guards, orchestrates a prison break for Aneka, a lover who T’Challa’s mother sentenced to death taking the vigilante justice approach to kill a criminal who was terrorizing women in the village; and the two have stolen the prototypes for what appears to be two masked, super-soldier suits. And Zenzi, the villain who lives in the Nigandan Border Region, said that when she tapped into the Wakandans’ minds, that she simply “revealed to them, in all their agony, their deeper truer selves… The people don’t hate their king, they are ashamed of him.” She and her partner reveal their plans to use that rage, and their own army, to create “another Wakanda—and a better and brighter world.” This is only the first issue, but it seems inevitable that to any of these forces will be able to get much done without joining ranks with one or both of the other parties – but will their enemies be each other, or the villains that crippled Wakanda in the first place? Coates is an avowed comic book nerd, but with his gripping, uncompromising depiction of racism in America, he doesn’t seem too attached to happy endings—so we’ll have to wait for to see how this story plays out, with new issues releasing every month.

The idea of superhero infighting isn’t an unfamiliar one. It’s the basis of the two biggest comic book blockbuster films this season, Batman v Superman and the aforementioned Captain America: Civil War. In the former, a straw-thin plot twist (that battle stopping because their mothers had the same name still feels lazy weeks after watching) leads to Batman, Superman and Wonder Woman putting a stop to their bickering so they can team up to fight a villain that ultimately can’t stand up to all three of their skills put together. The idea of a villain looking to take down a crippled society to resurrect a new one isn’t new either; Ra’s al Ghul, Bane and the League of Shadows from the Dark Knight Trilogy of Batman films are among the many villainous organizations who plan to use the build-and-destroy method.

But this feels different. Seeing all of these African characters plotting and warring against each other feels more comparable to the infighting between civil rights groups in the 2014 film “Selma,” or the Twitter sparring between activists who all agree that systems of white supremacy are the real enemy—or even rappers dividing-and-conquering within the genre when the odds are already stacked against them to win in the mainstream. Of course, action fans will be thrilled to see these characters square up against each other. As Coates so matter-of-factly told the New York Times, “People need to hit each other,” in superhero stories. T’Challa and his army fight against his former Dora Milaje comrades, a pair of badass women who know his forces inside and out and stole some of their advanced technology to use in battle. And I can’t wait to see how T’Challa, a brilliant scientist in his own right, will come up with a way to tackle the mind control that turned his people against each other and defeat the opponents who used it. Still, knowing that all these black characters are warring as a result of outside forces makes me more invested in the hope of them reuniting to fight a larger evil.

But the same elements that make The Black Panther #1 so jarring also makes it exciting. Even if all of these characters are preparing to go to war with each other, it’s empowering to see black and queer people exercising such autonomy—they’re making their own principled decisions to change the world around them instead of waiting for permission. Aneka took out a criminal who was terrorizing fellow women, and when her partner Ayo saw her sentenced to death for it, she exploded a prison and stole state-of-the-art weapons so they could seek their own justice. T’Challa is ready to use all at his disposal to take out the enemies who infiltrated his kingdom, and that opposing kingdom is ready to do the same to build their own. Meanwhile, T’Challa’s mother was willing to send one of her own soldiers to die to uphold the laws that she holds dear. Seeing all of these characters bask in their own agency and flaunt smarts, technology, special powers and fighting skills in the process is incredible.

Additionally, Stelfreeze’s imagery drives the point home. Seeing T’Challa’s sculpted, black-costumed body brazenly breaking up a group of attackers and gracefully speeding through a sea of people is powerful, especially when you see his dark brown face revealed when he unmasks himself after the battle. An afro’d Zenzi majestically sits cross-legged while explaining the results of her mind control to her partner-in-crime. The rage in Ayo’s eyes pierces the page after a prison guard nearly kills Aneka after the prison break, leading to her beating up the other assailants before flying away with her lover in her arms.

Maybe we should be grateful. In real life, the group infighting is collateral damage—something we have to accept because none of the people fighting for our rights are superhuman. But in a comic, we get to see those opposing forces showcase technology, martial arts and strong decision-making while working out their issues. If issue #1 is any indication, this new run of Black Panther is just as much of a look into the real world as it is an escape from it—and that’s exactly what great art should be.