First Listen: Staff Reactions To The Game's "On Me" Featuring Kendrick Lamar 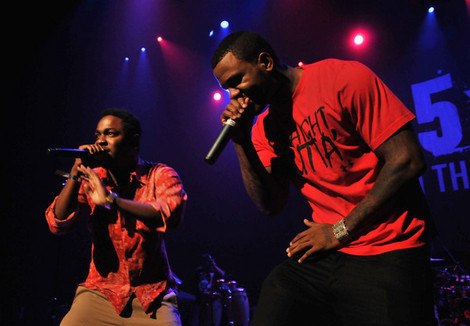 Following last week’s explosive release of “El Chapo,” The Game continues to wet the appetites of those anticipating The Documentary 2 with something a lot smoother than his drug lord influenced turn-up record. Teaming with Compton brethren Kendrick Lamar for the first time together since Jesus Piece collaboration “See No Evil,” Sir Jayceon Taylor recruits producer Bongo ‘The Drum Gahd for the Erykah Badu sampled “On Me.” As hype around the track builds after dropping this morning, Features Editor Andre Grant and Senior Features Writer Ural Garrett give their first reactions to the lyrical sparring between the two CPT emcees.

Do The Game & K. Dot Knock It Out Of The Park Again?

Ural: Who would have ever thought The Game would utilize an Erykah sample after Jay Electronica put him in his place for that one line on the Lil Wayne and Tyler, The Creator guested “Martians vs. Goblins?” Looks like all is forgiven as “On Me” is a complete 180 from the hyper-trap vibe of “El Chapo.” The Game spits his very specific level of visceral rhymes that are filled with very small details that are equally humorous and hard as fuck. “I was out here bloodin’ like a menstrual with a backwood bridged between my dentist,” he rhymes with a bouncy delivery before later switching his flow on an interesting doo wop acapella near the track’s end. One can literally hear the fire burning in Game as he seems very much in control of his flows. And, thankfully, he doesn’t fall under the astronomical weight of King Kendrick.

Can Kendrick do anything wrong lyrically at the moment? He seems to serve as a backup homie to Game’s ride metaphorically with bars “Live by it, die by it, then reincarnate, and if Game told it, drive by it, I raise AK.” Then there’s the slowed spoken word poetry before giving the stage back to The Doctor’s Advocate himself. And from the looks of things, Lamar has really been playing around creatively with his singing voice. TDE’s biggest star has evolved from dominating features to bringing out the best out of the lead artist. His actual song making ability has improved a lot past his actual rhyming which seems impenetrable. Guess that’s the real lesson learned from To Pimp A Butterfly.

At this point, I can personally proclaim my excitement in hearing the full body of work The Game has in store for The Documentary 2. “100,” “El Chapo” and now “On Me” are some of the best tracks this year. Those worried about The Game’s post-Interscope career shouldn’t have much to ponder anymore.

Andre: That Erykah sample goes so hard that you almost forget you’re listening to The Game and Kendrick Lamar go back to back. So here we have two bookends of the West Coast renaissance doing their thing. Game’s style is the more 2000s of the two, as his first verse spill out into the air with a signature cool forged in the granite of consistent beef. Kendrick is at the top of his game right now, and I frankly feel bad for anyone who has to share a track with him. His spit-fire, multi-syllabic, multiple personality flow is infectious and feels almost too creative. He’s able to slam what seems like competing ideas against each other in his very own large hadron collider.

Game must have felt like that too, because after a chill first verse, he goes in on the second, giving us a glimpse of the Game that made “300 Bars” sound fresh and exciting. His words gain velocity now, as he barrels forward over Erykah’s lingering falsetto. Kendrick fades into background mode too, trying not to drown the track in his presence. It still kind of feels like he takes over, as though his ideas now carry so much weight that they cannot be denied. When he slows down his voice and drops it an octave, then transitions it into this wild-acapella movement it means that you’ve now entered into Kendrick’s world.

Still, The Game does not get out rapped. He refuses. And that staunchness is what makes this track the gem that it is. So while “El Chapo” apparently won’t be making the album, hopefully we can rely on songs like this to eek a double-disced classic out of The Game.