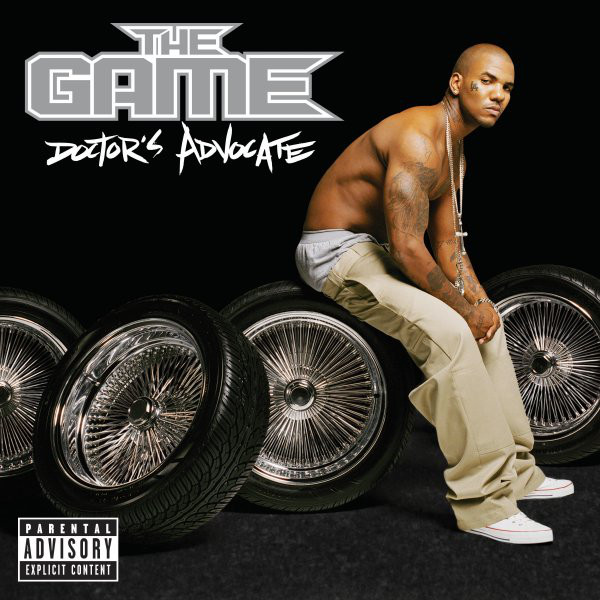 I’m not
sure if it’s a shame or if it’s appropriate that this album will largely
just be judged by Game dickriders
claiming it’s a classic and G-Unot
fell off and 50 Cent fan boys
calling it wack and calling Gayme a
faggot. It’s a shame because an albums’ success shouldn’t be fueled or failed
by fans whose homoerotic blind allegiances won’t allow them to deal in anything
but wild extremes. Though it may be appropriate, as Game has really brought that on himself with his constant flip-flopping,
one week claiming he is done beefing with G-Unit,
a 7000 bar diss track the next week, then offering a truce to 50 the next week – followed quickly by
another 8400 bar diss.

That’s just
the tip of the iceberg when it comes to controversy for The Game though; there has been endless speculation about his being
sent from Aftermath to Geffen and why his “Doctor” wasn’t
doing any beats on an album with the title dedicated to him. Toss in a
fight with Ras Kass, the
ever-changing tattoo, Change of Heart,
steady claims he isn’t a blood and Game’s
constant shit talking about anyone and anything and you’ve got a never-ending
buzz about an album.

Things
haven’t really changed much from The
Documentary, even with the absence of Dr.
Dre (whose fingerprints still seem to be present mind, you). The production
(Just Blaze, Kanye West, Will.i.am,
Hi-Tek, Scott Storch, Nottz, JR Rotem, Swizz Beatz, Jelly Roll, Denaun Porter,
DJ Khalil), is absolutely outstanding yet again. While it may not have
quite as many jaw dropping beats as The
Documentary had, it is just as consistent. Unfortunately, Game’s incessant name dropping is still
here, every bit as excessive and irritating as it was last time, if not worse.
Name drops of rappers and/or albums: 142. Of that, 41 is Dr. Dre. That folks, is ridiculous.

The problem
with Game is he is pretty terrible
when he has nothing to talk about, and it just becomes him trying not to ruin a
dope beat with name-checking and infinite references to low riders, bloods,
bandanas, guns, daytons, weed, khaki suits and chucks – which is exactly why
the best songs on the album come when Game
gets sincere with his subject matter. “Why You Hate The Game” featuring Nas, “One Night” (though some may
question its legitimacy), “Ol’ English” and “Doctor’s Advocate” featuring Busta Rhymes. The latter song really
puts Game’s behavior into
perspective, painting a picture of him as a young man struggling to handle all
the spotlight and drama he was suddenly thrust into. Ironically, he does a
lot of name-checking here, but there is actually some context and reason to it –
and it works.

“Compton,” featuring and
produced by Will.i.am, is a shining
example of Game’s shortcomings as an
emcee. In what could have been an incredible tribute to the historical city (as
Will’s beat is pure heat), Game just talks random shit for 3
verses, never really saying much at all. He manages to get by on Just Blaze’s ridiculous 1992 Dre impression on “The Remedy.” The
same can be said for the Swizz Beatz
banger “Scream On’em.” I mean really, what the hell does this mean? “blow his fucking back out/cause I’m the rap
Stackhouse.” What is the rap equivalent to Jerry Stackhouse? Nothing – that is rhyming for the sake of rhyming
and making no sense – which he does a lot, along with just rhyming the same
word with each other. On tracks like “Let’s Ride,” Game is flat out awful, supporting anyone’s notion that he can’t
rhyme for shit. Or, on the albums weakest track, “Around The World,” he
spits “She like that Jay shit, that’s her
favorite/if it’s gonna get me the pussy I’ma play that shit/if she bite too
hard I’m say that shit/but don’t bite me bitch I don’t play that shit.”
That is just so wack. But then he turns around on a song like Hi-Tek’s sinister “Ol’ English” and
you’re thinking “damn, dude is dope.” Some people can talk nonsense all day and
sound fly doing it – Game can’t. He
needs topics, and when he has them, he’s dope as hell. For someone who claims
to be so real, he spends most of the album shoving his gimmick down your throat
and it suffers for it. When he actually does come “real,” he makes classic
songs, there is no denying that.

The
soundscapes definitely deserve most of the credit here. JR Rotem is probably the show-stealer here, bringing back the
classic west coast whine on the booming “California Vacation” and showing the
soul on the title track. Along with the aforementioned “Remedy,” Just Blaze was also responsible for the
standout “Why You Hate The Game.”  Self
Scientific’s DJ Khalil’s “Da Shit” just oozes left coast while Scott Storch’s “Too Much” is just too
silky.  Hi-Tek manages to outdo
himself yet again on “Ol’ English,” which is absolutely captivating for both
his and Game’s performances.
Unfortunately Nottz doesn’t come as
strong as usual on “One Night” and Jellyroll
brings his usual mediocrity on “Bang.”

When Game falters on the mic, it isn’t just
the production that saves him; his seemingly unquenchable hunger is definitely
something to be admired and applauded. It would have been easy for him to phone
this one in after all his success the first time around – though he did let Kanye steal the show from him on “Wouldn’t
Get Far,” what is basically a tired rehash of Pac’s “All About U.” His incredible success so far may not have
affected his drive, but it’s certainly taken his ego up a hundred notches; the
best since Biggie and Pac? In the hall of fame behind Pac and next to Snoop? The west coast Rakim?
Calling himself the new Dre (uh, you
don’t produce, and no one regards Dre
as an emcee), although maybe the latter is to be taken more literally as Game spends several songs doing his
best Dre imitation, down to his
voice and his inflections.  A lot of you are gonna hate to hear it, but 50’s absence here is noticeable and
detrimental, as his sure fire catchy hooks are replaced with oft corny ones.

As an
emcee, when Game is on and has
something to say, he’s dope. You can’t deny that; he has proven his abilities,
be it storytelling the birth of his son or tearing G-Unit apart. But when he’s left just doing his marginal gangsta
rap thing, he can be really wack too. Luckily for Game, while he is inconsistent on the mic, his beat selection is as
good as it gets. For another album he is just laced with some incredible
production from some of the best in the biz. It isn’t enough though; if Game wants to become the legend he
already is in his own mind, he needs to get consistent and continually prove he
is worth these beats. That means dropping his gimmick; you’re a blood from Compton, you love Chuck’s,
weed, lowriders, 100 spokes, Dr. Dre
and any and all types of gangsta shit. We get it, but we’ve heard it from you a
thousand times and a million times from others who have said it better. No I’m
not “hating,” I know the man has talent; he just needs to learn how to use it.

Check our
review of The Documentary HERE