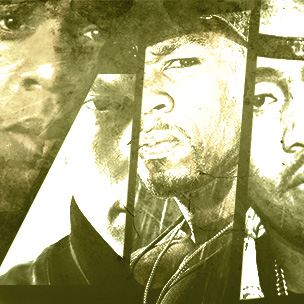 The term Mount Rushmore, most literally referring to the carved mountainside in Keystone, South Dakota, has been derived to mean the top four or pinnacle in instances outside of United States Presidents. For example, the Mount Rushmore of the Boston Celtics is Bill Russell, John Havlicek, Bob Cousy and Larry Bird.

HipHopDX has taken this idea and used it for the last two decades of Hip Hop music. In an effort to document the ever changing landscape of the art form, we have done this in four five-year installments which will be released on a weekly basis for the next month. Without further ado, here is Hip Hop’s Mount Rushmore.

Hip Hop is always changing and the early aughts meant the continuation of the art forms move from counterculture to popular culture along with never before seen commercial and cultural viability. The continued growth brought along a more widespread fandom who would go on to become the arbiters of the culture. From the most prevalent caucasian rapper of all time in Eminem to the south beginning to spread its wings the winds of change were blowing. However, before that change came along in full swing the foundation, New York, would have what may have been its last dominant run to date.

Sales: 20X Platinum between these albums

After beginning his ascent in 1999 with The Slim Shady LP, Eminem capitalized on his buzz by finishing up an all-time great three-album run with The Marshall Mathers LP in 2000 and The Eminem Show in 2002. Both of those albums would be number one in the country and go on to multiple platinum certifications. His next release in 2004, Encore, would also be number one on the charts but came with mixed reviews as it failed to have the edge, intricacy of rhyming cadence and dark thematics of the releases that had made Marshall Mathers a cultural phenomenon. Encore turned out to be a turning point as this era would be the last time that we would see peak level Eminem.

Album(s): Get Rich or Die Tryin’

This placement is easily described in five words and one apostrophe: Get Rich or Die Tryin’. The last defining album by a New York emcee was the biggest thing from Jamaica, Queens to Compton, California when it was released in 2003. The masterpiece with double-digit hit tracks is among the greatest debuts in the history of the musical form. 50 would go on to release another solid work in The Massacre, but it would be downhill from there, which makes sense when considering just how monumental his debut was. It is a testament to that classic album that it alone is enough to put 50 Cent on this list. Despite that being enough, 50 did so much more in those years with his G-Unit cohorts on the two-time platinum Beg For Mercy and being, arguably, the bonafide creator of the modern mixtape with G-Unit’s 50 is the Future.

Sales: 9X Platinum between these albums

After a strong showing in the late 90s, it would have been understandable for Sean Carter to either descend or meddle in the same territory he had charted. What happened in reality could not have been further from that result. On one of the defining dates in the 21st century Jay-Z would release his Magnum Opus. The Blueprint took Jay-Z’s unparalleled flow and paired it with the experimental samples and production from an up and coming producer named Kanye West and his go-to producer Just Blaze. If an album with “Izzo,” “U Don’t Know,” and “Heart of the City” wasn’t enough he would go on to release The Black Album three years later. Despite several disappointing release around this time, these two albums are impressive achievements for an entire career, which propels him to the top.

Sales: 3X Platinum between these albums

After one of the greatest debut and sophomore album combinations in musical history, Nas hit a spell of bad releases and bad luck with I Am…  and Nastradamus. Esco would come back with a bang in the new millennium capitalizing on the cache of his previous works, naming his fifth studio album Stillmatic. This marked a return to the greatness his fans had missed. He would follow that a year later with an unconscionable fourth quarter of 2002. It began with the historic The Lost Tapes, a collection of songs spoiled by the leak for I Am… and tracks that didn’t make Stillmatic. Despite being scrap tracks, it is considered amongst the best releases of his career. Only two months later Nasir would release God’s Son all but cementing his return to form for any outlying doubters. He would close this time period with the underwhelming double album Street’s Disciple, but that cannot diminish one of all time greats returning to form like only few can.

For OutKast, it was another strong stretch with the best selling album within their illustrious discography in Stankonia. This apex of their creative space was marred by rumors of infighting between the Big Boi and Andre 3000 over the duo’s direction. The following album Speakerboxx/The Love Below would feature some incredible moments of musical achievement but more than anything serve as an end of life moment leaving fans wondering “what could’ve been.” As the south continued to flourish, Ludacris burst on the scene with a unique flow and sound that was unmistakably southern but nonetheless more accessible to the masses than his fellow southern emcees. He would come out strong in this half-decade with four-straight platinum works in Back for the First Time, Word of Mouf, Chicken-N-Beer, and The Red Light District.